Published by
José Gabriel Navarro,
Jul 7, 2022
The global film industry could be divided between two broad categories: producers and earners. Historically, Asian countries accounted for most of the movies made worldwide. Four of those nations – India, China, Japan, and South Korea – are among the top five producers, along with the United States. But the amount of money each market makes out of their productions leads to a different chart. The latest available data puts the U.S. as the leading country by overall filmed entertainment revenue, grossing more than the rest of the top five altogether: China, Japan, the United Kingdom, and Germany. However, China maintains the upper hand at the global box office with a turnover of more than seven billion U.S. dollars in 2021.

The restrictions imposed by COVID-19 forced the Chinese film industry to go back by a decade in terms of film releases. In 2021, moviemakers in China released 565 titles, about the same number recorded in 2011. Compared to 2018, the figure decreased by 38 percent. In Japan, the decline over that period was smoother, at 20 percent. Still, the 490 Japanese movies released in movie theaters in 2021 were even lower than in 2020, which indicates a more persistent struggle with the hardships resultant from the pandemic. For the Indian film industry, also among the top three producers, the road to recovery is a slow one. The number of movies made in India and released abroad doubled between 2020 and 2021, but this number amounted to less than half of the films exported annually before the coronavirus outbreak.

Everybody (still?) comes to Hollywood

The pandemic also had a long-lasting impact on the U.S. and Canada. The two countries are usually counted as a single market within the film industry, and in 2020, the number of movies released there stood slightly above 400 – one of the lowest in the 21st century. The following year presented more auspicious signs. In the first quarter of 2022, the number of shoot days spent on feature film production in Greater Los Angeles was just shy of 600, not too dissimilar from the corresponding quarters of 2019 and 2020. The workforce is also catching up. At the beginning of 2021, the motion picture and sound recording segments employed around 422 thousand people in the U.S., up 35 percent from a year earlier.

In the following 6 chapters, you will quickly find the 49 most important statistics relating to "Film production worldwide ". 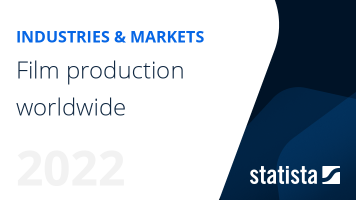 The most important key figures provide you with a compact summary of the topic of "Film production worldwide " and take you straight to the corresponding statistics.