Published by
P. Smith,
Jan 12, 2022
The entry of a hard discounter into a country’s grocery market can have profound consequences for every company on the market. Today, Belgium’s grocer Colruyt can itself be considered a discounter. The company only survived the market entry of Aldi due to drastic measures and a heated price war with the German discounter, until a new status quo was achieved.
For a lot of European markets, battles like this have already happened and the initial shock has worn off. Today, roughly 23 percent of all grocery shopping in Europe is done in discounters. However, Lidl and Aldi are still expanding their presence in Europe and in the United States. The discounters have yet to reach the full extent of their potential growth.

Discounter features usually include a minimalistic service for customers, a streamlined product assortment, and reduced prices with a high share of own or private label products. Product presentation is minimalistic and store spaces are used with high intensity. The resulting high inventory turnover is the engine that keeps the discounters running.

Depending on the country, the market share of discounters can reach up to two thirds of the grocery market, as in Norway. In Germany, the home of Aldi and Lidl, a much smaller share of between 37 and 43 percent of the market could be attributed to the discounter channel. Looking at the entire German retail trade sector, the discounter market share still amounted to over 15 percent. Five German discounters operate on the country’s market, led by Aldi and Lidl.

The Schwarz Group, owner and operator of the discounter Lidl, is the biggest grocery retailer in Europe, directly followed by Aldi (Aldi Einkauf GmbH & Co. oHG). Only the Schwarz Group could claim a share of nearly seven percent of the entire European grocery market. Besides Lidl, the company also operates the Hypermarket Kaufland, with branches in multiple European countries.

The German juggernauts operate in most European countries. Aldi is split into two separate groups, owned by different members of the German Albrecht family, which usually do not operate in the same country. Aldi Süd operates stores in the British Isles, Italy, Hungary, Slovenia, Austria and Switzerland, while Aldi Nord operates in the rest of Western Europe, Denmark and Poland. The German market is split between the companies. When Aldi’s competitor Lidl opens its stores in Latvia and Estonia in 2020, it will be active in 28 European countries.

Other European discounters either seldomly conduct business in multiple countries or only in a few select ones. The Belgian Colruyt stores can only be found in Belgium and France. Polish discounter Biedronka runs stores only in Poland, while Eurospin only operates in Italy. Other companies have a greater variety in store types and only a fraction of their stores can be considered discounters.

In the following 6 chapters, you will quickly find the 44 most important statistics relating to "Discounters in Europe".

The most important key figures provide you with a compact summary of the topic of "Discounters in Europe" and take you straight to the corresponding statistics. 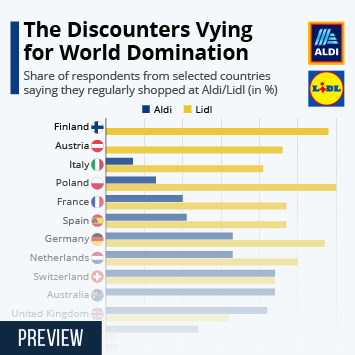