Published by
Dominique Petruzzi,
Jul 14, 2022
Revlon is a longstanding multinational cosmetics and personal care company headquartered in New York City. The United States is considered the most valuable beauty and personal care market in the world, reaching over 80 billion U.S. dollars in revenue in 2021. As such, the majority of Revlon Inc's sales comes from the North American region. The United States is also one of the main markets for prestige cosmetics and fragrances, an industry that reached 22 billion U.S. dollars in sales as of 2021.

The beauty conglomerate divides its company into four segments: Revlon, Elizabeth Arden, Fragrances, and Portfolio, with the first one being responsible for most of Revlon's sales. The global net sales of the company have fluctuated in the last ten years but remained stable overall. Consequently, Revlon’s gross profit has also been inconsistent in this time frame, reaching 1.23 billion U.S. dollars in 2021. Over the past few years, the advertising spending of Revlon Inc. has also experienced a decrease, going from 550 million U.S. dollars in 2017 to slightly over 388 million in 2021.

Revlon in the United States

Personal care products are among the most purchased by U.S. consumers, with an annual average expenditure of approximately 199 U.S. dollars per consumer unit. Revlon and its brands are well-known in the North American country: in 2022, Revlon Colorsilk ranked among the leading hair care brands among U.S. female consumers. Recently, Revlon was also one of the leading women’s at-home hair coloring vendors, after totaling sales of nearly 152 million U.S. dollars and over 45 million units.

In the following 5 chapters, you will quickly find the 39 most important statistics relating to "Revlon Inc". 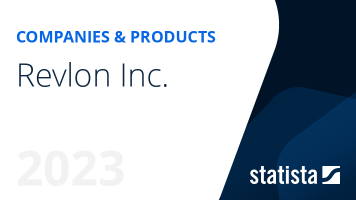 The most important key figures provide you with a compact summary of the topic of "Revlon Inc" and take you straight to the corresponding statistics.

Hair care product and shampoo market in the U.S.