Published by Molly Moore, May 20, 2020
The unexpected outbreak of the novel coronavirus in December 2019 sent shock waves throughout the world. At the end of January 2020, the outbreak of COVID-19 was declared a public health emergency. By April 2020, the pandemic had spread to over 200 countries and created economic and social panic like no other before, which was greatly detrimental to many vital markets. The Asia Pacific region, accounting for over half of the total global population, faced uncertainties with a number of its key industries. Although originating in Wuhan, China, the number of COVID-19 cases spread dramatically throughout the whole Asia Pacific region. Powerful economies such as South Korea and Japan all felt the disruption which the coronavirus outbreak caused. The respiratory lung infection can cause problems with breathing, which could then in turn lead to the contraction of pneumonia. In some very severe cases, COVID-19 holds the possibility of death. Symptoms of COVID-19 can include fever, a dry cough, and breathing difficulties.
In an attempt to control and prevent further spread of the virus, lockdown measures were introduced throughout many countries across the Asia Pacific region. This saw the closing of borders and banning of any unnecessary activities. The economic fallout of the coronavirus was prominent in the Asia Pacific region, the outbreak stunted economic growth. With many countries in the region possessing a high dependency on Chinese business, the slowdown of the Chinese economy had a great impact on the Asia Pacific region. With the shutting of borders and heavy reliance on Chinese tourism, suddenly Asia Pacific countries saw the growth of tourist arrivals diminish. As the tourism industry is vital for several Asia Pacific countries, the losses in tourism posed a significant threat to many Asian economies. Thailand made steps to address the imbalance of its tourism industry, attempting not to rely so heavily on Chinese tourism. Singapore and Hong Kong are among other regions in Asia Pacific dependent on Chinese tourism and thus, have felt blows to their respective economies resulting from the outbreak.

As of April 2020, China experienced the highest number of COVID-19 cases throughout the Asia Pacific region, with India, Singapore, Japan, and South Korea following. Despite South Korea having a high number of cases, citizens were hopeful that the number of cases would stabilize or decrease. Many citizens across Asia Pacific also expressed worry over the development of the pandemic. With daily cases slowing in China, the lockdown period in Wuhan officially ended in April 2020, with citizens slowly returning to normal life. However, lockdown measures continued throughout the rest of the Asia Pacific region as cases and deaths continued to rise.

In the following 5 chapters, you will quickly find the 28 most important statistics relating to "Coronavirus (COVID-19) in Asia Pacific".

The most important key figures provide you with a compact summary of the topic of "Coronavirus (COVID-19) in Asia Pacific" and take you straight to the corresponding statistics. 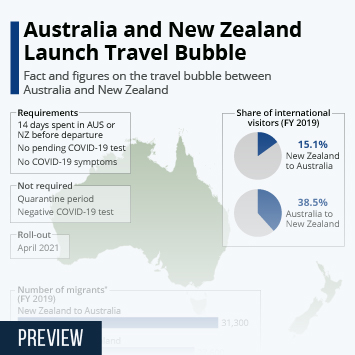