Published by Statista Research Department, May 6, 2022
The outbreak of the infectious disease COVID-19 has caused global economic and societal disruptions. The first confirmed case in Japan was reported on January 16, 2020, since then the number of cases rose with five main periods of sharper increases around April 2020, August 2020, January 2021, May 2021, August 2021, and from January 2022 onwards. As of March 16, 2022, the total number of patients diagnosed positive with the virus (SARS-CoV-2) reached nearly 5.9 million with a total death toll of 14.3 thousand.
The total number of patients examined with the polymerase chain reaction (PCR) test was approximately 41.7 million (government laboratory) and 57.9 million (National Institute of Infectious Diseases and local institutes for health), respectively.

Development of cases and countermeasures

Since the outbreak of the disease, the Japanese government declared the state of emergency four times for respective prefectures from April to May 2020, January to March 2021, April to June 2021, and July to September 2021. After a period of a low infection rate between October and December 2021, Japan experienced a sharp increase in cases from January 2022 due to the spread of the Omikron variant. The government announced a quasi-emergency in January 2022 and requested 34 prefectures to, for example, restrict the opening hours and alcohol serving hours of restaurants. Large events with an audience of over 20 thousand people were also prohibited.
Despite the steadily higher number of new infections per day compared to previous years, the government decided to lift all restrictions on March 21, 2022. Border measures are also gradually eased, and foreign nationals are allowed to enter the country for business purposes from the beginning of March 2020 onwards. The entry bans for tourists, however, continue as of March 2022.
The distribution of COVID-19 vaccination in Japan began in February 2021, mainly for health professionals. In April 2021, the government initiated the vaccine administration for the general population, starting from people aged 65 and older. As of the middle of March 2022, close to 75 percent of the general population were fully vaccinated with the second dose, while the booster rate reached 33 percent.

The outbreak has not only caused severe ramifications for the health sector and hospitals but also triggered an economic recession in Japan. The losses at the Nikkei Stock Average (Nikkei 225) for March 2020 alone were the worst since the Global Financial Crisis in 2008. In the second quarter of 2020, the real GDP growth rate recorded its sharpest fall in history after WWII of over 28 percent (annualized figure compared to the last quarter).
Although both stock markets and GDP growth have recovered to the pre-COVID-19 level by Q3 in 2020, the situation for businesses in the country is still alarming authorities. As of February 2022, an estimated total of around 31 thousand employees in the manufacturing industry and 18 thousand in the retail industry were dismissed due to the direct impact of business stagnation resulting from COVID-19. Corporate bankruptcies directly related to COVID-19 exceeded 2.9 thousand nationwide as of March 2022.

In the following 8 chapters, you will quickly find the 39 most important statistics relating to "Coronavirus (COVID-19) in Japan".

The most important key figures provide you with a compact summary of the topic of "Coronavirus (COVID-19) in Japan" and take you straight to the corresponding statistics. 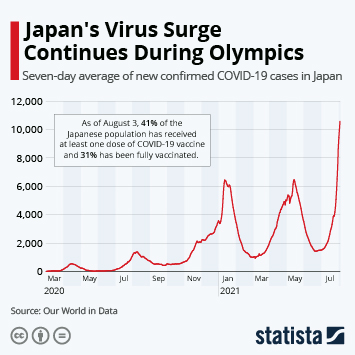 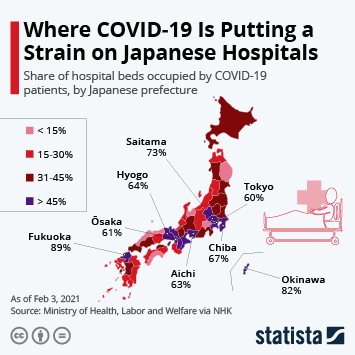 Where COVID-19 Is Putting a Strain on Japanese Hospitals