Published by Daniela Coppola, Jul 18, 2022
With e-commerce sales going upward, mobile shopping shows no signs of slowing down in France. In 2021, sales revenue from mobile e-commerce accounted for almost half of total e-commerce sales in France. At the same time, the leading e-retailers owe most of their online traffic to smartphone users, a gradually expanding customer base that drives e-commerce businesses to become mobile-first.

As with other digital interactions, shopping is more portable and mobile than ever. Consumers do not sit around to find the latest trends from retailers anymore, on the contrary, online stores follow consumers. Back in 2019, less than one in five French buyers would regularly shop through their mobile devices, while two years later nearly a third of them did so. Shopping habits are gradually shifting and increasingly shaped by apps and social media browsing.

Over the last years, the share of e-commerce sales via mobile applications increased at the expense of mobile versions of desktop sites. Mobile-driven shopping also implies a higher connection with social media. In France, smartphone traffic is responsible for the highest share of visits from social media platforms, if compared to other devices.

Mobile usage is more popular among younger generations, as people aged under 39 have the highest percentage of smartphone and tablet ownership. Mobile shopping is — first and foremost — smartphone-based, as almost half of French consumers feel inclined to purchase on mobile phones, leaving tablets at nearly 20 percent.

Besides e-commerce, mobile shopping rules contactless payments. In France, Apple Pay is by far the most used mobile payment service. Google Pay, in turn, shows a slightly higher brand awareness, with seven out of ten French consumers having heard of it. Despite this seemingly consolidated scenario, a new domestic player has stepped into the contactless payments segment. By mid-2021, the French app Paylib reached over 30,000 monthly downloads from each Apple and Google app stores.

In the following 5 chapters, you will quickly find the 23 most important statistics relating to "Mobile commerce in France". 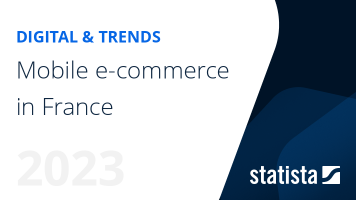 The most important key figures provide you with a compact summary of the topic of "Mobile commerce in France" and take you straight to the corresponding statistics.

Online and mobile banking in France