Published by
Christina Gough,
Jul 11, 2021
The Washington Nationals are a Major League Baseball team located in Washington, DC., who play in the Eastern Division of the National League. The Nationals won the division in 2012 and 2014 and finished both years with the best winning percentage in the league. In 2019, the Nationals won the National League Championship Series and, for the first time, the World Series. The Nationals were formerly called the Montreal Expos and relocated to the capital of the United States after the 2004 season. The team was owned by the American real estate developer Ted Lerner before his retirement in 2018, when he handed over the role to his son, Mark D. Lerner.
The franchise value of the Washington Nationals has been increasing steadily in recent years, reaching around 1.93 billion U.S. dollars in 2021, compared to 480 million U.S. dollars in 2012. This estimated value in 2020 is marginally higher than the average MLB franchise value, which stands at just over 1.85 billion U.S. dollars. The team generated about 119 million U.S. dollars in revenue in the 2020 season and the operating income of the Nationals for that season amount to a deficit of 67 million U.S. dollars, a harsh decline in that year as will all other professional sports clubs due to the COVD-19 pandemic.

Cumulative home attendance of the Washington Nationals games reaches well into the millions every year. The team plays its home games at the Nationals Park in Washington, DC, which has been the Nationals’ home since 2008. The average regular season attendance dropped to under 28 thousand in 2019, having been consistently over 30 thousand since 2012. The average ticket price for games of the Nationals has been increasing over the past few years and amounted to over 44 U.S. dollars for a ticket in the 2019 season. The team’s Twitter and Facebook accounts have over 700 thousand fans and followers each.

In the following 4 chapters, you will quickly find the 40 most important statistics relating to "Washington Nationals". 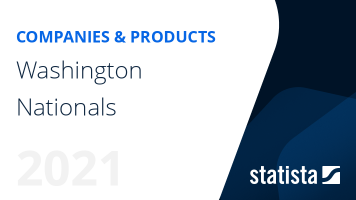 The most important key figures provide you with a compact summary of the topic of "Washington Nationals" and take you straight to the corresponding statistics.