Published by
Dominique Petruzzi,
Feb 9, 2022
Skin and hair care, makeup, personal hygiene, and perfumes: the term “cosmetics” commonly refers to consumer products used by both men and women for beauty and personal care purposes. Dating back to ancient Egypt, the application of cosmetic products developed into a global industry, which in years before the COVID-19 pandemic grew at an annual average pace of around 4.1 percent. In 2020, however, this positive trend experienced a significant revert when the size of the global beauty market shrank by eight percent. A similar development was registered in Mexico as the economic effects of the COVID-19 pandemic unfolded. Between 2019 and 2020, this North American country’s cosmetic industry recorded a contraction of 5.3 percent.

In 2020, Mexico was the eighth largest exporter of hair care products worldwide and the only Latin American country in the top ten, with exports worth more than 540 million U.S. dollars. The nation was also the main importer of hair preparations in Latin America a year earlier, surpassing by a small margin the other major Latin American destination for this type of trade: Chile. By the end of the past decade, hair care was the second most valuable cosmetic segment in Mexico, with an annual value of over 35 billion Mexican pesos. To meet the internal and external demands, the North American country produces on average over 45 million shampoo and conditioner units, nearly 22 million units of hair styling products, and 17 million units of hair dye and bleach products per month.

There are significant differences in the consumption of beauty and personal products among men and women. For instance, female participants in a 2020 survey in Mexico reported spending 60 percent more on cosmetics than their male counterparts. Women surveyed during the same study also showed a higher interest in sustainable products; whereas 46 percent of responding men reported purchasing personal care products without regard for their eco-friendliness, only six percent of responding women agreed with that statement. Nonetheless, for both men and women, the price was the leading factor to consider when buying beauty and hygiene items, while brand ranked second for both genders.

In the following 6 chapters, you will quickly find the 31 most important statistics relating to "Cosmetics industry in Mexico". 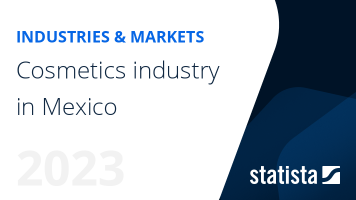 The most important key figures provide you with a compact summary of the topic of "Cosmetics industry in Mexico" and take you straight to the corresponding statistics.

Beauty and personal care in Colombia