Veganism and vegetarianism in the United Kingdom - statistics & facts

Published by
Nils-Gerrit Wunsch,
Mar 24, 2022
Among consumers in the United Kingdom, there is a growing interest in reducing meat consumption. This has turned meat eaters into flexitarians, vegetarians, or even vegans. These dietary choices are so popular that only 66 percent of consumers in the UK describe their diet as "not following any nutrition rules", while many other consumers have reduced their meat consumption in one form or another. Approximately three percent identified themselves as vegan. Those following a vegan diet do not consume any animal-derived food products or ingredients. The idea of eating no meat is much more widespread among younger consumers than among the older generations. Meat-free food consumption will thus become even more important in the British market in years to come. The UK market for meat substitutes is already worth over 500 million euros, making it the largest in Europe.

Veganism in the UK

Rates of veganism among different demographic groups follow a few distinct patterns. As eating no meat is more common among younger consumers, it is not surprising that veganism is also more widespread among the young. Secondly, female consumers are more likely to be vegans than their male counterparts. Urban centers in Britain are also more likely to have a higher share of the population following a vegan diet than other regions.

Vegetarianism in the UK

In contrast to vegans, vegetarians do eat animal products, with the exception of meat. Pescatarians also add fish to their diet. These two meatless diets are followed by a combined total of 12 percent of consumers in the UK. Vegetarians account for seven percent of the UK's population, while pescatarians accounted for five. Among vegetarians there is a clear-cut trend visible. The younger a consumer is, the more likely they are to be a vegetarian. Among UK adults under 20, the share of vegetarians has reached 11 percent. London is the most vegetarian region in Britain followed by the North East.

In the following 4 chapters, you will quickly find the 28 most important statistics relating to "Veganism and vegetarianism in the UK".

Statistics on the topic
Share of vegans in the UK
4%
Meat substitutes market size in the UK
502m EUR
Sales revenue of vegetarian food and drink products and plant-based alternatives in the UK
1.1bn GBP 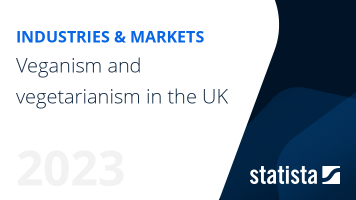 The most important key figures provide you with a compact summary of the topic of "Veganism and vegetarianism in the UK" and take you straight to the corresponding statistics.

Veganism in the UK

Vegetarianism in the UK