Vegetarianism and veganism in Canada - statistics and facts

Vegetarianism and veganism are the practices of maintaining a meat-free diet. While vegetarians typically choose to not eat meat, poultry, game, or fish, vegans also abstain from other animal and animal-derived products, including dairy, eggs, and honey. By-products of animal slaughters, such as gelatin or animal rennet, are also avoided. There are many different reasons to adopt a meat-free diet; while some opt for this diet for religious reasons, others turn to this practice for health reasons, with many considering the vegetarian diet to be a healthy option. Concerns over animal welfare, as well as the impact of animal agriculture and environmental matters, have also led people to become vegetarians or vegans. Over the last few years, the increasing adoption of meat-free diets has raised awareness of the issues surrounding animal agriculture, thus encouraging many people to rethink their eating choices.
Although meat is traditionally considered to be a major part of the Canadian diet, Canadians are becoming more conscious about meat consumption and diet options. In 2020, almost 40 percent of consumers in a survey in Canada stated that they were willing to reduce their meat consumption, whilst around 9 percent were fully intending on doing so. There are around 2.3 million vegetarians and 850,000 vegans in Canada, with the majority located in British Columbia.

Indeed, the consumption per capita of beef and pork in Canada has witnessed a long-term decrease. However, the consumption of chicken per capita has increased, suggesting that some Canadians are specifically cutting out red meat from their diets. Canadian females aged 55 and over were the most likely demographic to avoid beef and other red meats in their diet in a recent survey. Veganism is also having a visible impact on the dairy industry; along with other factors, veganism in Canada could be a reason for the decline of milk consumption in the country.

Meat and dairy substitutes are popular replacements for consumers looking for the same tastes, flavors and nutritional content as the original products. The retail sales of meat substitutes in Canada were forecast to reach over 220 million U.S. dollars by 2022, an increase of over 100 million since 2015. Beyond Meat was the leading plant-based protein brand which Canadian consumers had tried at home in 2019.
This text provides general information. Statista assumes no liability for the information given being complete or correct. Due to varying update cycles, statistics can display more up-to-date data than referenced in the text.

Number of vegetarians in Canada
2.3 million

Number of Canadians who are vegetarian or vegan 2018

Number of Canadians who are vegetarian or vegan 2018

Province with the highest share of vegetarians and vegans
British Columbia

Vegetarianism and veganism rates in Canada by region 2018 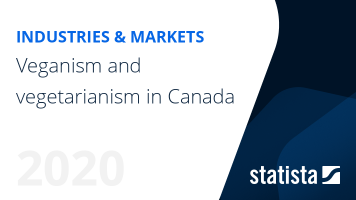 Go to report Veganism and vegetarianism in Canada
Top Seller

The most important key figures provide you with a compact summary of the topic of "Vegetarianism and veganism in Canada" and take you straight to the corresponding statistics.