Breakfast cereals in the UK - statistics and facts

Breakfast cereals are a popular choice for morning meals in Britain. A multitude of cereal brands are consumed by millions of British consumers each year. Kellogg's alone can be found on 17.5 million British kitchen tables. In the United Kingdom, the market for breakfast cereals is worth close to 2.9 billion U.S. dollars in revenue. Recently, market revenues and consumption volumes both saw an uptick compared to prior years. The cause for this is very likely the increased time consumers spent at home due to the coronavirus pandemic where they eat more breakfast cereals.

The brand with the highest reach among British cereal consumers is Kellogg's Corn Flakes. It was the only brand that reached more than 6.7 million Brits. The next most popular choice for breakfast cereal is Quaker Oats So Simple, which reached six million kitchen tables. The single most popular private label breakfast cereal is Tesco's Corn Flakes, which reached over a million British consumers. It is hardly surprising that Tesco, leader on the British grocery market, achieves the highest reach with its private label product. All other private label breakfast cereals of Tesco reached a combined six million customers.
This text provides general information. Statista assumes no liability for the information given being complete or correct. Due to varying update cycles, statistics can display more up-to-date data than referenced in the text.

Revenue of the breakfast cereal market in the UK
2.76bn GBP

Revenue of breakfast cereals in the United Kingdom 2014-2027

Volume of breakfast cereals sold in the UK
499.3m kg

Breakfast cereal brands of Tesco in Great Britain 2013-2020, by number of users

Leading breakfast cereal brands of Asda in GB 2013-2020, by number of users 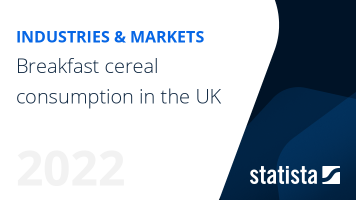 The most important key figures provide you with a compact summary of the topic of "Breakfast cereals in the UK" and take you straight to the corresponding statistics.