The meat industry in Canada is comprised of production and processing, packing, preservation, and marketing of meat such as, beef and veal, lamb and mutton, pork, chicken, goat, rabbit, horse, and wild game such as venison and bison. Meat is widely consumed in Canada, with the quarterly retail sales of meat and poultry averaging about 4.25 million Canadian dollars for the first three quarters of 2021.

In 2021, the volume of beef produced in Canada amounted to 1.35 million metric tons. Canada’s meat processing companies manufacture a wide variety of meat products ranging from fresh and frozen meat to processed, smoked, canned, cooked, as well as sausage and deli meats. The meat product manufacturing industry in Canada generated some 5.85 billion Canadian dollars in gross domestic product in December 2021, up over 200 thousand Canadian dollars in the same month in the previous year.

The Canadian meat industry is widely recognized for well-established safety standards of the highest quality as overseen by the Canadian Food Inspection Agency (CFIA). However, many Canadians are willing to reduce their meat consumption or cut meat entirely out of their diets. A recent survey of Canadian consumers found that 36 percent were willing to reduce the amount of meat they consumed. The top reasons Canadians were considering cutting out beef from their diets were concern for their overall health and concern for the environment.
This text provides general information. Statista assumes no liability for the information given being complete or correct. Due to varying update cycles, statistics can display more up-to-date data than referenced in the text.

Revenue of the meat manufacturing industry in Canada
32.7bn CAD 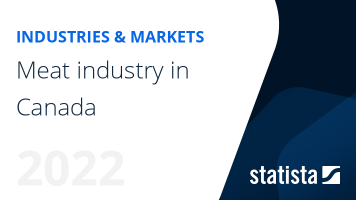 The most important key figures provide you with a compact summary of the topic of "Meat industry in Canada" and take you straight to the corresponding statistics.