Grocery shopping in China has undergone a profound revolution in the past decades. Less than half a century ago, most people in the country had to rely on ration coupons for food and daily necessities. Today, consumers in many cities can order goods produced far and near via their smartphones and have them delivered to their doorstep within 30 minutes. Estimates show that China will be the world’s second-largest grocery market in 2022 and is expected to overtake the United States in 2024.

The rise of the grocery market in China

Of the many outcomes of the economic reformation in China over the years, one that has affected the public positively was the steady increase in disposable income across the nation. While a large disparity still exists between the annual per capita income of rural and urban households, one cannot help but acknowledge the rate at which household net income has increased since 1990. Eastern China is one of the most affluent regions, with the annual disposable income of urban household members amounting to a little over 52 thousand yuan.

Alongside the increased disposable incomes, China’s food and personal care market also saw a rapid rise in the past decades. With thousands of grocery retailers opening across the country, the sales value of fast-moving consumer goods grew by over 50 percent between 2012 and 2021. As of 2020, China still conducted about 60 percent of its grocery sales offline. Nevertheless, the country is expected to witness robust growth in its e-grocery retail business in the coming years.

Since nearly a decade ago, e-commerce has become an unstoppable trend in China. By 2021, online retail held more than 30 percent of the FMCG retail market in China, thanks to the rapidly developing internet penetration and postal services. Fresh food was one of the quickest developing sectors within online retail. In 2021, the online sales value of fresh produce surpassed 4.9 trillion yuan, with approximately 70 million consumers purchasing fresh food from the most popular e-commerce companies. Online shoppers claimed to find grocery shopping most convenient on e-commerce platforms and were usually quite satisfied with product delivery services as well as food safety aspects.

The outbreak of the coronavirus pandemic further accelerated the digitalization of grocery shopping in China. In 2021, the fresh e-commerce market in China reached 564 billion yuan, doubling its value in 2019. According to a survey, nearly half of Chinese consumers have increased their online shopping usage since the pandemic started. Among all online retail channels, horizontal e-commerce websites such as Tmall and JD.com won the most online grocery shoppers in China.
This text provides general information. Statista assumes no liability for the information given being complete or correct. Due to varying update cycles, statistics can display more up-to-date data than referenced in the text.

Yihan Ma
Research expert covering e-commerce and FMCG in Greater China
Get in touch with us now
Published by Yihan Ma, Sep 22, 2022

Projected value of the world's largest food markets in 2022

Revenue of the food market worldwide 2021, by country

Per capita expenditure on food, tobacco, and liquor in urban households
8,678 CNY

Leading FMCG retailers in China 2021, based on sales value 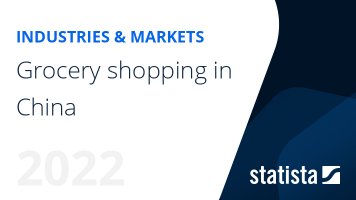 The most important key figures provide you with a compact summary of the topic of "Grocery shopping in China" and take you straight to the corresponding statistics.