Published by
J. Mendoza,
Jul 12, 2022
Latin America has been one of the most strongly affected regions by the COVID-19 pandemic, with countries like Argentina, Brazil, Chile, Colombia, Mexico, and Peru ranking among the nations with the largest number of cases and deaths resulting from the disease. Brazil, the most populated country in the region, is also home to the largest  number of cases. It was also in Brazil that the first case of COVID-19 in Latin America was confirmed, on February 26, 2020. When it comes to the number of  deaths caused by the disease, Brazil ranks second in the world. Mexico and Peru rank fifth and sixth. Moreover, the COVID-19 disease has proven highly fatal in Peru as well as in Brazil, both registering some of the highest death rates per one million inhabitants in the world.

Beyond a sanitary crisis

The COVID-19 pandemic in Latin America has posed an unprecedented threat within a region already facing multiple challenges. The contingency has reached various socio-economic dimensions and has presented itself as more than a purely sanitary crisis. While the outbreak has negatively impacted the global economy, the result for Latin American households has been overwhelmingly challenging. With GDPs affected and governments limited by budgetary and political constraints, little to no economic support has been offered to citizens. This has resulted in the exacerbation of multiple social issues and a further increase on cases as people desperately seek for income sources as a result of unemployment.

The health crisis itself has also been aggravated by regional constraints. The lack of testing capacity, overcrowded hospitals, and limited resources such as medical oxygen, are some examples of what Latin American patients have been facing throughout the pandemic.

A glimpse of hope: immunization campaigns

As higher-income countries discuss the possibility of applying a second round of booster shots to their already immunized and immunocompromised population, while facing the challenge of those who do not want to get vaccinated, countries in Latin America are still dealing with the constrained acquisition of doses for covering their local demands. Within the region, the immunization process differs from country to country. While more populated nations such as Brazil, Mexico, and Argentina, had already administered millions of doses by mid-2022, Haiti had just applied over 342 thousand for a population surpassing 12 million people. When talking about doses per 100 inhabitants, numbers look different, with Cuba and Chile ranking on top. Which vaccines had been applied and how they have been obtained, also differ from nation to nation. In Chile, for instance, most people have been vaccinated with Sinovac’s COVID-19 vaccine, while in Mexico the most applied one has been that of AztraZeneca. Moreover, while some countries have acquired an important share of their vaccines, others rely heavily on donations, such as those provided under the COVAX program, or by high-income nations.

In the following 5 chapters, you will quickly find the 25 most important statistics relating to "Coronavirus (COVID-19) in Latin America".

The most important key figures provide you with a compact summary of the topic of "Coronavirus (COVID-19) in Latin America" and take you straight to the corresponding statistics. 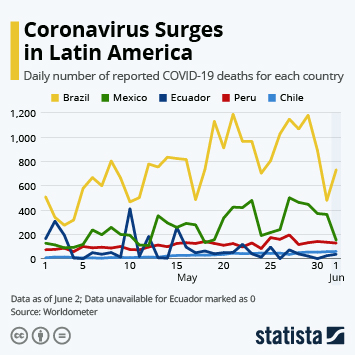 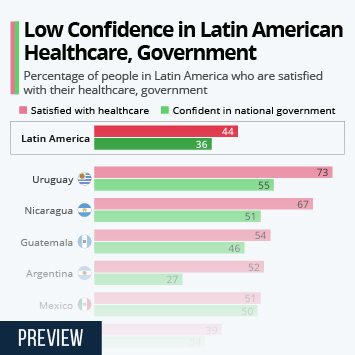