Until a few years ago, playing video games demanded time, money, and special equipment, largely limiting this activity to those who could meet these standards. Mobile devices, particularly smartphones, have forever changed the gaming landscape, serving a decisive role in its democratization. In 2020, as many as 147 million people were estimated to be mobile gamers in Latin America. As both smartphones and mobile internet become more prevalent in the region, this figure is set to increase by almost 17 percent by 2025, accounting for nearly ten percent of global mobile gaming users.

Redefining what it means to be a gamer

In addition to removing the long-standing barriers that limited those who were enthusiastic or curious about gaming, mobile games have also helped break down the stigmas around who can and cannot play, attracting audiences who previously would not have considered themselves gamers. According to a 2020 survey, mobile gaming has had such a strong reception in Latin America that more than eight out of ten adults stated playing on their mobile, regardless of age or gender. Unlike conventional gamers, mobile users do not prioritize a gaming experience, but rather pure entertainment. In fact, for many Latin Americans, mobile games do not even require their sole attention and may be played while simultaneously performing other activities. Of mobile gamers taking part in another survey that year, around one third said they watched TV while playing, and up to 15 percent reported eating at the same time.

In 2020, the COVID-19 pandemic led people all over the world to be confined to their homes, leaving many with a lot of time on their hands. According to a survey conducted that year, in the midst of the health crisis in Latin America, more than three-quarters of mobile gamers in the region engaged in this form of entertainment at least once a day. In addition, over 40 percent of them accumulated one hour or more of gaming in a 24 hour-period. Mobile games have thus become an ingrained tool in the daily lives of its users. By providing the ease of dropping in and out of it when desired, mobile devices have made it possible to play at any point of the day, thereby freeing gamers from the constraints of time. When asked about the time of day in which they usually play, more than half of mobile gamers surveyed in Latin America admitted to doing it at any given time.
This text provides general information. Statista assumes no liability for the information given being complete or correct. Due to varying update cycles, statistics can display more up-to-date data than referenced in the text.
Published by Statista Research Department, Oct 18, 2022 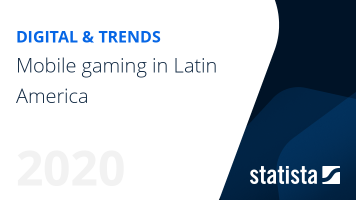 The most important key figures provide you with a compact summary of the topic of "Mobile gaming in Latin America" and take you straight to the corresponding statistics.