Published by
J. Clement,
Mar 15, 2022
In its 27-year history, the Pokémon Company has sold over 350 million units of the game’s series, with ever new addition taking the video game industry by storm. After numerous video games and various spin-offs, Pokémon’s debut series Red/Green/Blue remains the franchise’s best-selling console game to date, with over 31 million units shipped worldwide.

In January 2022, the franchise successfully released Pokémon Legends: Arceus for the Nintendo Switch. The Switch-exclusive title outsold other recent Pokémon game launches in Japan and moved more than 6.5 million units in its first week of global sales. The core games are released in generations, each with different Pokémon, characters, and sometimes new regions. Announced in February 2022 with a release date later in the year, Pokémon Scarlet and Violet will be the first games of the upcoming ninth Pokémon generation.

Apart from being a global gaming giant, Pokémon has also become one of the highest-grossing media franchises of all time. Today, the brand’s empire encompasses a popular anime series with over 1,178 episodes, a trading card game, merchandise, and several movies that continuously draw fans to the theater.

The latest animated film, Pokémon the Movie: Secrets of the Jungle, was originally set for release in Japanese theaters on July 10, 2020, but delayed to December 25, 2020 due to the COVID-19 pandemic. Pokémon Detective Pikachu, the first official live-action Pokémon film, was released in May 2019 and was met with commercial success, placing as the second highest-grossing video game film adaption off all time.

The Pokémon animated series is currently in its 24th season, which is called Pokémon Master Journeys: The Series. The series includes the new Galar region from the 2019 Pokémon Sword and Shield games and some of the January 2022 episodes are based on the then newly released Pokémon Legends: Arceus game.

In July 2016, the franchise expanded its global reach by venturing into the world of mobile gaming for the first time. With the launch of Pokémon GO, a location-based augmented reality (AR) mobile game, the franchise managed to create a global sensation and re-ignite the initial Pokémania of the 1990s. Players around the world were fascinated by the idea of catching virtual Pokémon in real-world environments, fueling download numbers and revenue at an unprecedented pace. Years after its initial launch, Pokémon GO still enjoys great popularity across the globe, placing among the leading free-to-play (FTP) game titles worldwide and generating over 904 million U.S. dollars in IAP revenues in 2021. With these revenue figures, Pokémon GO still ranked as one of the highest grossing mobile games worldwide.

In the following 4 chapters, you will quickly find the 30 most important statistics relating to "Pokémon gaming".

The most important key figures provide you with a compact summary of the topic of "Pokémon gaming" and take you straight to the corresponding statistics.

Gaming market in the Asia-Pacific region 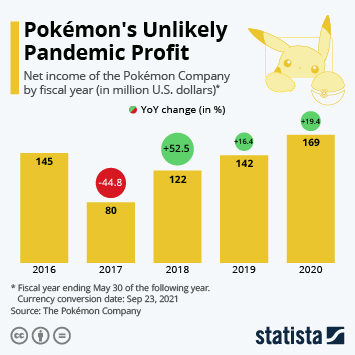 Net income of the Pokémon Company by fiscal year 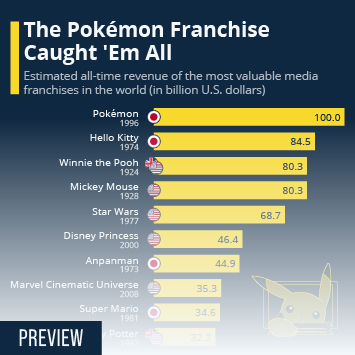 media franchises with most sales