Warehouse clubs offer a more limited range of products than a traditional supermarket and aim to attract shoppers who wish to save money by buying in bulk. Shoppers need to have a membership and pay a fee to be able to shop in these types of stores. Based on currently available figures, the warehouse club and supercenter industry generated more than 500 billion U.S. dollars in revenue and employed over 1.5 million people across the United States. The most prominent players are Costco and Sam’s Club (owned by Walmart), who are also considered to be amongst the leading retailers in the country. BJ’s Wholesale Club is another competitor, though on a smaller scale compared to the former ones.

A comparison between warehouse club players

In terms of net sales, Costco ranked number one generating nearly 100 billion U.S. dollars more than its counterpart Sam’s Club, and seven times more than BJ’s Wholesale Club. Concerning locations in the United States, Sam’s Club operated slightly more warehouses than Costco, while BJ’s had a little over 200 stores across the territory. Unlike BJ’s, Costco and Sam’s Club have an international presence. Costco not only operates in North America, but it also has a presence in some European and Asian countries, as well as Australia. In the case of Sam’s Club, the retailer has stores in Mexico, Brazil, and China.

Are warehouse clubs a good option?

Warehouse clubs are more likely to be a great deal if consumers like to buy in bulk and are committed to certain brands. However, membership fees which can range from 45 U.S. dollars to 120 U.S. dollars (depending on the company), could end up being a significant expense if consumers are not able to save at least the amount that they are paying for their membership annually. In this regard, warehouse clubs usually offer two types of memberships: a basic and a premium one. Each contains different benefits and rewards. When comparing Sam’s Club, Costco’s, and BJ’s premium membership, Sam’s Club is the less expensive one, costing 100 U.S. dollars per year.
This text provides general information. Statista assumes no liability for the information given being complete or correct. Due to varying update cycles, statistics can display more up-to-date data than referenced in the text.

T. Ozbun
Research expert covering food retail and all food topics for Italy and Brazil
Get in touch with us now
Published by T. Ozbun, Jan 27, 2022 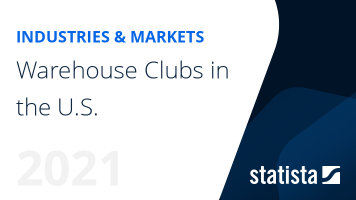 The most important key figures provide you with a compact summary of the topic of "Warehouse Clubs U.S." and take you straight to the corresponding statistics.