A retail chain is often defined as a company with multiple retail outlets in various locations. Stores belonging to the same chain are usually under the same management and have standardized business practices. The typical types of retail chain stores include specialty stores, department stores, supermarkets, and convenience stores.

The rise of domestic retail chains

China has long been a desirable market for leading international chain retailers, owing to its vast consumer base and its surging economy. In the 1990s, a number of global retail corporations have entered the Chinese market, including Walmart, Metro, and Carrefour. The number of foreign-funded retail chains in China exploded after China became a member of the World Trade Organization (WTO). In 2005, over 1,000 foreign-owned retail enterprises opened in China, more than tripling the number from the previous decade.

The soaring consumer market in China also accelerated the development of domestic retail chains. Nowadays, the populous country is home to a growing number of chain stores, ranging from shopping malls to convenience stores. Chinese retail chains performed strongly in recent years and are ambitious to conquer a larger share of the market. In 2019, the retail giant Suning.com acquired Carrefour China, while Metro sold its majority stake in the country to Wumart, a local retailer.

As a result of the nation’s proliferation of e-commerce, China’s chain retailers have faced challenges as never before. In 2009, retail chains in China contributed to nearly half of the country’s retail revenues, while in 2019, the share plunged to less than 30 percent.

China’s chain store operators took on transformative journeys towards digitalization and smart retail in the face of change. Nowadays, a growing number of department stores have initiated omnichannel businesses, including WeChat retail, live streaming shopping, and group buying. On the other hand, Chinese chain retailers also adopted more technology elements in their physical stores, including installing self-checkout systems, facial recognition technology, and interactive displays. Over 60 percent of the retailers that increased their technology adoption reported positive impacts on customer flows and sales value.
This text provides general information. Statista assumes no liability for the information given being complete or correct. Due to varying update cycles, statistics can display more up-to-date data than referenced in the text.

Yihan Ma
Research expert covering e-commerce and FMCG in Greater China
Get in touch with us now
Published by Yihan Ma, Jun 28, 2021

Sales of retail chains in China 2020, by sector

Region with the most retail chain stores
Guangdong

Number of branches of retail chains in China 2020, by region 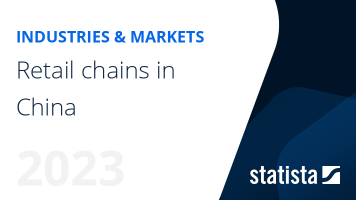 The most important key figures provide you with a compact summary of the topic of "Retail chains in China" and take you straight to the corresponding statistics.