Sweden is one of the countries with the highest SVoD penetration rates worldwide. As of 2021, roughly 40 percent of the Swedish population were using at least one Subscription Video-on-Demand (SVoD) service to watch the latest blockbusters or binge their favorite shows over the internet. Like in many other digitally developed markets in which SVoD platforms have overtaken cinema as the most popular channel for movie watching, Swedish audiences have also shifted their focus away from television and other traditional forms of video entertainment to embrace more flexible, non-linear digital offerings. With more streaming channels entering the Swedish market every year and the number of available titles expanding at a rapid pace, viewers’ appetite for streaming content is not expected to cease any time soon.

With more than 1.5 million subscribers and a daily reach of around 25 percent, Netflix remains the most popular SVoD platform in Sweden. The global streaming giant has dominated the Swedish home entertainment landscape for many years, and in early 2021, Netflix also announced the opening of their first Nordics hub in Stockholm. Despite this ongoing expansion and a wave of original content productions in the region, Netflix is facing increased competition from both international players such as Disney+ and domestic staples such as Viaplay, which are all taking larger slices of the Swedish streaming pie than ever. As of 2021, Disney+ held a 10-percent market share among SVoD services in Sweden, while local suppliers accounted for the highest number of paid subscriptions overall. Swedish streaming platforms are more influential than ever but considering that services such as the recently launched Paramount Plus continue to hit the market, audience interest and subscription earnings are constantly shifting.

Consumer interest and demand for video streaming content have never been higher. In 2020, the number of Swedish households subscribing to video streaming services grew by over 10 percent to reach 2.6 million, and in line with this development, consumer spending on SVoD services in Sweden also continues to spike each year. Swedish audiences are paying good money to watch their favorite shows and movies from the comfort of their homes or on the go. According to a recent report, Sweden is only topped by Denmark when it comes to the average cost of SVoD content in the Nordic countries. Despite comparatively high subscription costs, over 30 percent of respondents to a 2020 survey stated that they subscribe to more than one streaming platform to meet their entertainment needs, highlighting the vast potential for growth in this particular market.
This text provides general information. Statista assumes no liability for the information given being complete or correct. Due to varying update cycles, statistics can display more up-to-date data than referenced in the text.

Julia Stoll
Research expert covering TV and video media
Get in touch with us now
Published by Julia Stoll, Nov 17, 2022

Households with at least one VOD subscription in Sweden 2017-2021

Households with at least one VOD subscription in Sweden 2017-2021 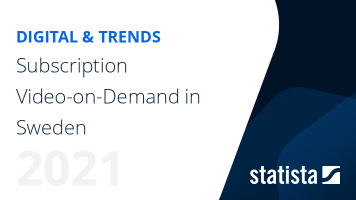 The most important key figures provide you with a compact summary of the topic of "Subscription Video-on-Demand in Sweden" and take you straight to the corresponding statistics.