Published by
Mariam Saleh,
Oct 28, 2021
Along with other Mediterranean countries, Tunisia is one of the main producers of olive oil worldwide. The country’s mild climate, with sunny weather and relatively stable temperatures throughout the year, represents the ideal environment for olive trees, which suffer from extremely cold weather and climatic changes. Olive crops grow easily in the country and occupy the largest agricultural area, corresponding to around 1.9 million hectares as of 2021. Thanks to the abundance of olives, olive oil is produced in large quantities and afterward exported internationally or consumed domestically.

The most exported food product

Olive oil is the main food product exported from Tunisia. In 2020, it accounted for around 47 percent of total food exports, followed by dates at 15 percent. In the same year, the product reached an approximate export value of 2.3 billion Tunisian dinars (837 million U.S. dollars), increasing considerably compared to 2019. Monthly exports did not decline during the coronavirus (COVID-19) outbreak in 2020. On the contrary, they peaked in March 2020 at 260 million Tunisian dinars (around 93 million U.S. dollars).

Most olive oil is exported in bulk, with an average export price ranging from 7.37 Tunisian dinars (around 2.60 U.S. dollars) per liter for virgin olive oil to 5.32 Tunisian dinars (1.88 U.S. dollars) per liter for lampante oil. The main export destinations of bulk olive oil are Spain and Italy. Together with Tunisia, these Mediterranean countries are the leading exporters of olive oil worldwide, but they are also among the leading consumers of this product. Olive oil is therefore imported to sustain a high domestic demand. Part of the imported oil is mixed with the local oil and then packaged under Italian or Spanish brands.

On the other hand, a smaller part of the exports is made up of bottled olive oil from Tunisian brands. For this reason, Tunisian olive oil remains less known worldwide compared to that from Italy or Spain. The United States and Canada are the main destinations of Tunisian packaged olive oil.

Apart from being exported, Tunisian olive oil is also sold and consumed domestically. In the city of Tunis, the retail price of a liter of olive oil in bulk is around ten Tunisian dinars (approximately 3.53 U.S. dollars). Due to well-developed local production, olive oil is commonly used as a seasoning in Tunisian cuisine. Tunisians consume an average of over three liters of olive oil per capita every year and the total annual consumption has been increasing annually since 2016.

In the following 6 chapters, you will quickly find the 30 most important statistics relating to "Olive oil industry in Tunisia". 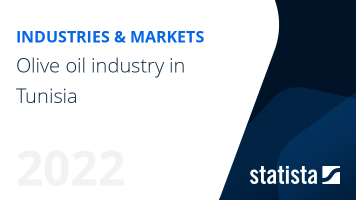 The most important key figures provide you with a compact summary of the topic of "Olive oil industry in Tunisia" and take you straight to the corresponding statistics.

Condiments and seasoning market in Europe

Mariam Saleh
Research Expert covering North Africa, specializing in the socio-economic environment of Algeria, Libya, Tunisia, and Morocco
Get in touch with us now