Minorities and representation in TV and film - statistics & facts

Movies and television shows can transport audiences to different time zones, places, and imaginary worlds. They can make viewers feel emotions through the stories they tell and the characters they portray. But do they also reflect the diversity of the audience they cater to? This question has been raised more frequently than ever in the recent past, with calls for appropriate inclusion and representation becoming louder every year. Data on the distribution of employees in the U.S. motion picture and video industries shows that women and minority groups are distinctly underrepresented behind the scenes. While on and off-screen diversity has come a long way, the world’s largest theatrical film market still has some catching up to do.

Hollywood has made slow but steady leaps towards diversity in the recent past. Looking at some of the key employment areas, it is undeniable that women, people of color, and other minority groups have made meaningful progress. For example, women essentially reached proportionate representation among movie leads in 2020. And while 2020 was also the year with the highest share of female directors in the history of Hollywood, women remain underrepresented behind the camera. A similar picture is painted for people of color, who have approached proportionate representation among film leads and total actors while accounting for only 25 percent of writers and directors. When it comes to honoring the cinematic contributions of diverse creatives, award shows also have a long way to go. At the 93rd Academy Awards in 2021, for example, Chloé Zhao made history by winning the Oscar for Best Director as the first woman of color. Overall, she was only the second woman to succeed in the category since the Oscar’s were first presented in 1929.

Being seen on the (small) screen

Over the past decade, the share of series regulars on U.S broadcast TV that are people of color has steadily increased, indicating that the country’s TV landscape is gradually becoming more diverse. Interestingly, this trend has also been fueled by the streaming revolution. Streaming programs have shown to employ a higher percentage of women behind the scenes than broadcast networks, and on screen, the cast and narratives of streaming shows are also expanding in terms of inclusivity. That said, there is still work to be done when it comes to issues surrounding gender, race, ethnicity, and LGBTQ portrayals. Knowing that on-screen presence does not automatically imply inclusion, Disney+ added a content warning to movies that contain inaccurate cultural depictions or perpetuate negative stereotypes. This step prompted outcries from many viewers, which also aligns with the findings of a recent report. When asked about their attitudes towards controversial content on streaming services in 2020, a majority of white adult respondents expressed that platforms should keep such content for its historical value.
This text provides general information. Statista assumes no liability for the information given being complete or correct. Due to varying update cycles, statistics can display more up-to-date data than referenced in the text.

Julia Stoll
Research expert covering TV and video media
Get in touch with us now
Published by Julia Stoll, Jan 10, 2022

Share of female employees in the U.S. motion pictures and video industries
38%

Distribution of employees in the motion picture and video industries 2021, by gender

Share of minority lead actors in movies in the U.S.
38.9%

Employees in the motion picture & video industries in the U.S. 2021, by ethnicity

Distribution of employees in the motion picture and video industries 2021, by gender 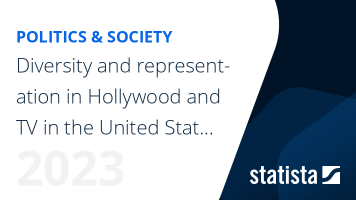 The most important key figures provide you with a compact summary of the topic of "Minorities and representation in TV and film" and take you straight to the corresponding statistics.

Academy Awards
Workforce diversity at online companies
Minorities in Media in the U.S.
Disney Plus
TV and movie awards shows