Repair market of household appliances in France - statistics and facts

Published by Statista Research Department, May 5, 2022
The repair market of household appliances in France is rapidly expanding. More and more French prefer to repair their home appliances and electronic devices instead of replacing them. The most frequently repaid products in France are electric home appliances. In contrast, high-tech products ranked fifth in terms of repair occurrence. On average, over 50 percent of large household appliances in the country suffered a breakdown within the first five years of their lifespan. Miele products were reported to have the lowest breakdown rate, at 38 percent. This comes as no surprise as breakdown rates for premium brands specialized in the manufacturing of household appliances were considerably lower compared to budget-friendly manufacturers. For instance, when it comes to washing machines, Miele’s products had an average lifespan of over ten years, while the one from Samsung was almost three times lower.

Overall, more than eight out of ten French agree that the repair industry helps preserve the environment. Nevertheless, the repair industry in France has a substantial impact on the country’s economy by supporting local businesses and generating a high number of jobs. In 2019, the average repair rate of appliances in case of a breakdown stood at 54 percent. In contrast, the replacement rate totaled 54 percent, with large household appliances being more likely to be repaired than small household appliances. France's most preferred repair service came from independent stores and private individuals at the expense of more prominent companies or manufacturers. While there is still plenty of space to improve sustainable behavior among consumers and manufacturers, France's repairability index sets an example for other countries.

In the following 8 chapters, you will quickly find the 34 most important statistics relating to "Repair market of household appliances in France". 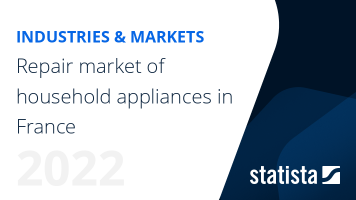 The most important key figures provide you with a compact summary of the topic of "Repair market of household appliances in France" and take you straight to the corresponding statistics.