More than 20 years after Apple introduced the first iPod, the company officially discontinued its iconic line of portable music players on May 10, 2022. That means Apple will no longer make the iPod touch, which will, however, remain available until it eventually runs out of stock. The iPod touch has been the last iPod standing ever since Apple discontinued the iPod Shuffle and iPod Nano in 2017.

“With iPod, Apple has invented a whole new category of digital music player that lets you put your entire music collection in your pocket and listen to it wherever you go,” Steve Jobs, Apple’s CEO at the time, said when the first iPod was introduced in October 2001. “With iPod, listening to music will never be the same again,” Jobs added and right he was. The first iPod jumpstarted the rise of digital music and quickly became Apple’s hit product. As our chart illustrates, iPod accounted for as much as 40 percent of the company’s revenue in 2006, the year before the first iPhone was released. With the growing popularity of smartphones, however, MP3 players were gradually pushed towards obsolescence and iPod sales started declining in 2009.

In 2014, the last year Apple broke down iPod sales as a separate category, the company sold 14.4 million iPods, down from nearly 55 million units in 2008. That year (2014), the iPod accounted for just 1.25 percent of Apple’s revenue, explaining why the company had no problem pulling the plug on two of the last three remaining models in 2017 (the iPod Classic had been discontinued in 2014). The iPod touch, which remained popular beyond its expiration date as an entry-level iOS device for children and as a cheap testing tool for app developers, was last updated in May 2019. Even back then, however, the improvements were so minor that the upgrade seemed more like a half-hearted attempt to keep the last iPod alive for just a little longer.

“Today, the spirit of iPod lives on. We’ve integrated an incredible music experience across all of our products," Greg Joswiak, Apple’s senior vice president of Worldwide Marketing, said in a statement, implying that there's no need for a standalone music player any longer. Between 2001 and 2014, Apple sold roughly 400 million iPods, and another (estimated) 50 million since. 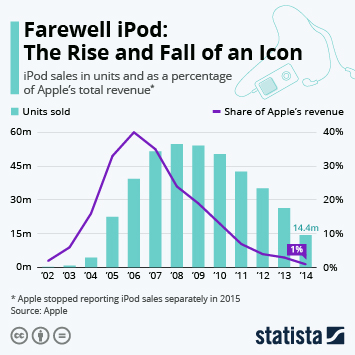 This chart shows Apple's iPod sales in units and as a percentage of the company's total revenue since 2002.