88.9k
Pure-play ad spending in the UK is estimated to have grown by 1,174 percent in a little over a decade. Between 2005 and 2019, Group M, IAB, PwC, and the Advertising Association report that digital forms of advertising, particularly pure-play, will continue to be one of the main drivers of growth in ad spending.

Digital as an avenue for advertising has existed for the better part of a decade, starting with the creation and execution of banner advertising, email marketing, and website development. As digital platforms grew, advertising focused on ROI, like e-commerce and search, expanded the revenue sources in the advertising industry. Advertising campaigns became more accountable due to the analytic capabilities digital provides, which pushed how advertisers optimized campaigns.

In 2005, only about 336 million pounds were spent on digital display, while TV ad spending hovered around 3.5 billion pounds and newspaper advertising hit over 4 billion pounds in the same year. By 2017, pure-play digital grew to close to 3.5 billion, while newspaper advertising shrunk to a little over a billion in ad spend. TV ad spending flatlined putting it on par with pure-play. The report put out by Group M, IAB, PwC, and the Advertising Association, predicts that trend will continue in 2019. 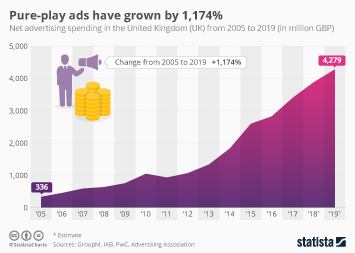 This chart shows that net advertising spending in the United Kingdom (UK) from 2005 to 2019 in millions of pounds.