Television remains one of the most popular and effective advertising channels worldwide. Despite the ongoing digitalization of the advertising industry and the proliferation of online video streaming services, marketers are still embracing the potential of (linear) television for brand promotion. In the United States, the leading advertising market worldwide, television ranks as the second most profitable advertising medium behind the internet and accounts for approximately one-fifth of total U.S. media ad revenue. As of 2021, TV ad spending in the U.S. amounted to 66 billion U.S. dollars, marking a return to growth following a drop in 2020 amidst the COVID-19 pandemic.

Eight decades after the first commercial aired on U.S. television, ads have become an integral part of the TV viewing experience. On broadcast networks such as ABC, NBC, or FOX, primetime advertising times range from an average of 12 to 17 minutes per hour, and while audiences are exposed to advertising messages daily, airtimes during top-rated TV shows, sports events, and awards ceremonies are particularly popular among U.S. marketers. During the 2020/21 TV season, NBC Sunday Night Football was by far the most expensive show for advertisers on broadcast TV, and the average cost of a 30-second TV commercial during the Super Bowl reached a record 6.5 million U.S. dollars in 2022. Seeing that these formats score millions of viewers every year, advertisers are ramping up their marketing efforts and investing higher budgets than ever to deliver their brand message. Procter & Gamble was the largest spender on both broadcast and cable network TV advertising, followed by a bevy of ad heavyweights including Amazon and AT&T. When it came to the industries that poured the most money into TV advertising, life and entertainment took the cake.

As the (pay) TV landscape faces increased competition from over-the-top (OTT) media and other non-linear streaming alternatives, marketers have started to adapt their advertising strategies to the changes in viewing behavior and preferences. In 2021, U.S. spending on connected TV (CTV) advertising stood at 13.4 billion U.S. dollars, and according to the latest forecasts, this figure will more than double by 2025. CTV advertising allows brands to reach their audience on smart TVs and OTT devices, including streaming players or internet-enabled gaming consoles. Given that an estimated 78 percent of U.S. households could be reached via CTV programmatic advertising and that this type of advertising enables more efficient audience targeting, marketers are increasingly focusing on non-linear video content consumption. Considering that SVoD subscribers are also less likely to skip ads that are relevant to them, the benefits of placing ad-supported content in new and dynamic TV and video environments are becoming more visible than ever.

TV and streaming ads were the media where consumers most recalled ads in the United States, while more than five out of 10 Americans found ads on linear TV to be effective in persuading viewers to buy a product or service. Viewers identifying as male found linear TV ads more effective than viewers identifying as female, while Millennial and Hispanic consumers found linear TV ads to be more effective when compared to other generations or ethnicities. Almost three out of 10 Americans said they felt comfortable with ads being targeted to them based on their personal information – an indicator that there is still ample room for improvement for marketers to make their targeted ads more unobtrusive and trustworthy for viewers.
This text provides general information. Statista assumes no liability for the information given being complete or correct. Due to varying update cycles, statistics can display more up-to-date data than referenced in the text.
Published by Statista Research Department, Jan 6, 2023

Global television advertising revenue from 2014 to 2026

Largest advertisers on cable TV networks in the U.S. 2021 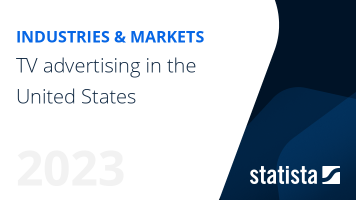 The most important key figures provide you with a compact summary of the topic of "Television advertising in the U.S." and take you straight to the corresponding statistics.