Published by
A. Guttmann,
Jan 18, 2019
Digital advertising is thriving. It is believed that the global digital ad market spending will grow from 226.6 billion U.S. dollars in 2017 to 464.73 billion in 2022. Social media, search, video and e-mail are the most pronounced formats and channels in the industry and generate a lion’s share of the revenues. However, before committing to any of these formats, as well as during and after their implementation, advertisers gauge their costs and profits based on the three most common metrics: click-through rate (CTR), cost-per-mille (CPM), and cost-per-click (CPC). In case of video advertising, viewability rates are also an important measurement, while e-mail marketers additionally consider engagement rates when assessing their campaigns.
Advertising and marketing via social networks is still growing in popularity. So much so that the majority of industry professionals indicate an increase in the use of popular social platforms as part of their promotional efforts. Cost-per-mille, also known as cost-per-thousand, is the amount advertisers must pay for 1,000 impressions of their advertisement on one webpage. In general, the latest data puts the quarterly average social media CPM at 5.4 U.S. dollars. However, CPMs differ based on numerous criteria such as type of platform, country, industry or campaign objective. For example, Facebook’s advertising average CPM worldwide was calculated at 1.26 U.S. dollars, yet it was highest in the UK (3.15 dollars) and lowest in Colombia (0.42 dollars). Conversely, the last measured Twitter ads global CPM was valued at 6.46 U.S. dollars.

When it comes to search advertising, Google AdWords CPC is highest for legal industry related searches, and lowest for e-commerce. In fact, based on latest data, the search term ‘lawyer’ ranked fourth on a list of most expensive keywords, with a cost of 54.86 U.S. dollars. In the case of CPA (cost-per-action), technology keywords are most expensive while automotive keywords are at the opposite end of the spectrum.

In the following 6 chapters, you will quickly find the 31 most important statistics relating to "Online advertising metrics".

The most important key figures provide you with a compact summary of the topic of "Online advertising metrics" and take you straight to the corresponding statistics.

Digital advertising formats in the U.S. 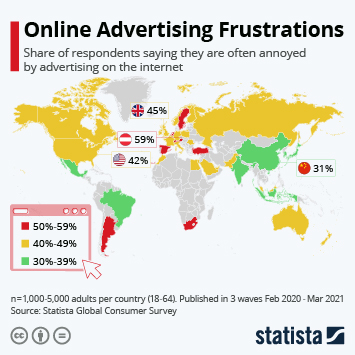