Skip to main content
53k
74.6k
87k
88.9k
After an interview with ITV's Joe Pike in which Boris Johnson was confronted with a photo of a four-year-old lying on the floor of an NHS hospital while awaiting treatment for suspected pneumonia, the Conservative Party's record on the NHS has been placed under renewed scrutiny.

During the exchange, the prime minister refused to look at the photo being displayed on Pike's phone, before taking the journalist's device and putting it in his pocket. As this infographic shows though, the Conservative's record on the NHS is something which should be addressed. While Johnson acknowledges the drastic need for increased investment, he has consistently refused to engage on the fact that the Conservatives have been the governing party for almost ten years. As analysis by the Institute for Fiscal Studies shows, Tory-led investment in public health has been poor in recent years and well below the average growth rate for the period 1949 to 2017.

Once removed from his pocket, the prime minister did look at the image, saying: "It’s a terrible, terrible photo, and I apologise, obviously, to the family and all of those who have terrible experiences in the NHS. But what we are doing is supporting the NHS and on the whole, I think patients in the NHS have a much, much better experience than this poor kid has had. That's why we're making huge investments into the NHS”.

Some of the pledges of investment though, have either been completely misleading (saying 50,000 nurses will be added to the NHS, but 19 thousand of which would simply be retained), or bold, headline-grabbing promises such as to build 40 new hospitals by 2030 while not going into any detail on the costing (the IFS puts the bill at up to £24 billion). 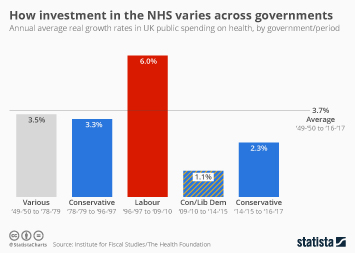 This chart shows the annual average real growth rates in UK public spending on health, by government/period from 1949 to 2017.