President Donald Trump announced Monday night that the U.S. would majorly limit immigration. It was later reported that this would likely apply to those trying to enter the country on immigrant visas for the purpose of work, those being sponsored by family members who are permanent residents but not citizens as well as more distant relatives of citizens. Trump is expected to sign an executive order concerning the issue that will stay in place for 60 days and then be re-evaluated.

Visas issued to immediate family of U.S. citizens (parents, spouses, children younger than 21) will still be honored for entry to the U.S, according to the administration. They account for another 40 percent of immigrant visas issued. Farm workers on temporary work visas will also not be barred.

Travel bans (for European countries, China and Iran) and appointment suspensions at U.S. embassies, both in place since at least mid-March, already put a big dent in tourist and other non-immigrant visa arrivals. Immigrant visas on the other hand are often a long time in the making. Applicants who had already completed all neccessary appointments with consular services and those already granted their immigrant visas had not yet been severely affected by the Trump administration coronavirus response.

The number of U.S. immigrant visas granted per year had hovered around 450,000 to 470,000 since 2006 before rising during the Obama administration and reaching a peak of 617,000 in 2016. Under Trump, numbers were back down to approximately 460,000 in 2019. Non-immigrants visas are actually the bigger category, with 8.7 million issued in 2019, among them 1.1 million for frequent border crossers from Mexico and Canada. 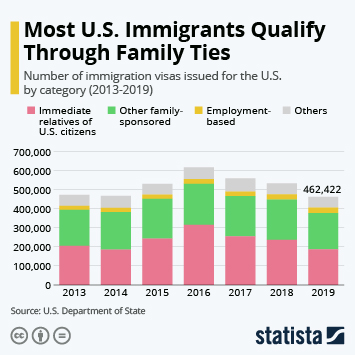 This chart shows the number of U.S. immigrant visas granted per fiscal year, by category.