According to the U.S. Bureau of Labor Statistics’ latest jobs report, roughly 17.75 million Americans were unemployed in June 2020, resulting in an unemployment rate of 11.1 percent on a seasonally adjusted basis. The number of people that are currently not employed is much higher than 17.75 million, however, as a look at another indicator, the employment-population ratio, reveals.

Standing at 54.6 percent in June, the employment-population ratio shows the percentage of the civilian noninstitutional population that is currently employed. In case you’re wondering, the civilian noninstitutional population comprises of all persons aged 16 and older who reside in the 50 states and the District of Columbia, are not inmates of institutions (e.g., penal and mental facilities, homes for the aged), and who are not on active duty in the Armed Forces. Of those 260 million people, only 142 million, i.e. 54.6 percent, had a job in June 2020, a historically low ratio only undercut in April and May 2020 when things looked even worse.

So why does the employment rate stand at 11.1 percent when almost half the adult population doesn’t have a job? That’s because roughly 100 million Americans are not part of the labor force, meaning they are neither employed nor counted as unemployed. According to the BLS, this category includes retired persons, students, those taking care of children or other family members, and others who are neither working nor seeking work. While the majority of these people is either retired or doesn’t want a job for other reasons, more than 8 million Americans want a job but are not actively seeking one nor have they filed for unemployment. 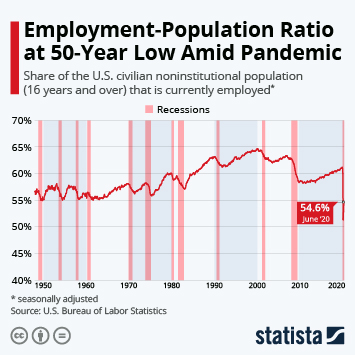 This chart shows the share of the U.S. civilian noninstitutional population (16 years and over) that is currently employed.