As the following chart shows, that is still higher than anything seen in the post-war era. 75 years after the end of the Second World War, the United States along with many other countries in the world are facing what U.N. Secretary-General Antonio Guterres recently described as the most challenging crisis since WWII. Before the coronavirus pandemic, the highest unemployment rate in post-war America, 10.8 percent, was recorded in December 1982, at the trough of a 16-month recession. The highest level of unemployment in recent history was observed in late 2009, shortly after the official end of the Financial Crisis. Back then the unemployment rate briefly hit 10 percent. Since then, the level of joblessness had gradually dropped to a 50-year low in February 2020, right before the pandemic hit American shores.

Please note that the Bureau of Labor Statistics acknowledged the existence of a misclassification error in unemployment data for March, April and May 2020, resulting in officially reported unemployment rates below actual levels. Please click here for more information. 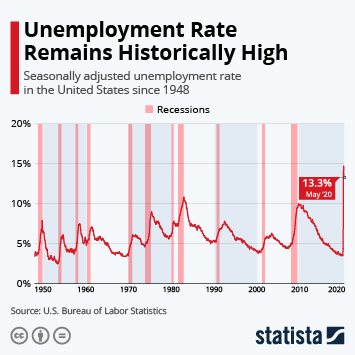 This chart shows the monthly unemployment rate in the U.S. since 1948.