Despite postmaster general Louis DeJoy confirming he is suspending controversial cost-cutting changes to the United States Postal Services until after the presidential election, Speaker Nancy Pelosi said the House will still meet on Saturday to vote on a bill to give it a $25 billion financial injection. The reversal comes after cuts to overtime, the removal of mail boxes, the cancellation of delivery runs and the closure of sorting centres caused consternation among Democrats who said the policies would damage postal voting and assist President Trump in his bid for a second term in the White House.

After saying as recently as last week that the he is opposed to additional funding for the postal service, President Trump himself made a surprise u-turn on Monday, tweeting "save the post office!" So just how bad is the financial situation at the USPS? Even though it is mandated to support itself through its own revenues, it hasn't turned a net profit since 2006 when it brought in $900 million. It has recorded more than $80 billion in cumulative losses since then, however, with the 2019 figure close to $9 billion.

The financial difficulties have arisen for a number of reasons and one of the most obvious ones is email. Between 2000 and 2019, the amount of physical mail items delivered plunged 31.4 percent with lucrative first class mail falling by 33.6 percent. While those declines have hit the USPS hard, the service does have e-commerce to thank for an increasing number of package deliveries, particularly during the pandemic. Unfortunately, that hasn't been enough to stem the organization's financial issues.

Behind all the financial chaos and political wrangling, the USPS brand remains strong and it consistently tops public surveys about the favorability of government agencies, a possible reason for some surprise changes in opinion this week. In April a Pew Research Center survey found that 91 percent of Americans have a positive view of the USPS, the highest of any federal agency. A more recent Morning Consult poll published earlier this month found that USPS is the single most loved brand in the country, outperforming nearly 2,000 other consumer-facing brands. 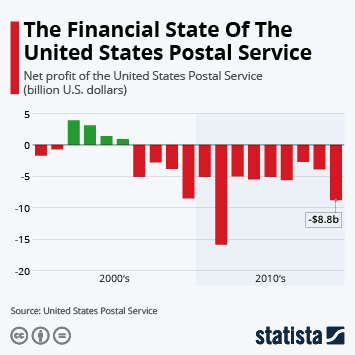 This chart shows the net profit of the United States Postal Service.