Once a large dam has reached the age of 50 years, whoever is in charge of its maintenance should be especially alert to the upkeep challenges and dangers an old dam can create. According to a new report by the U.N. Institute for Water, Environment and Health, dam keepers in the UK and Japan are most likely to be worried about the age of their water storage infrastructure. In both countries, average dam age has surpassed 100 years, double of what the report calls the “alert” age for large dams, defined as those with a height of at least 15 meters or a capacity of at least 3 million cubic meters (for dams between 5 and 15 meters high).

At the moment, the age of dams is reaching a critical point in many countries at the same time. The reason for this is the dam-building frenzy which occurred in the middle of the 20th century. In the late 1950s as well as in the 1970s, upwards of 1,100 dams were constructed every year. Since 1990, that number has dropped below 500 and below 300 since the year 2000.

The U.N. experts expect the number of new dam projects to remain low in the future, leaving the options of replacement or decommission for existing water storage infrastructure. Public safety and environmental concerns weighed against the cost and benefit of keeping a dam will decide their fates around the world. Already, dam failures (of all sizes of dams) have ballooned since 2005 and keep rising, having reached 175 incidents for the years 2015-2019.

The most common use for dams around the world is irrigation, followed by hydropower, drinking water supply, flood control and recreation. According to the report, 40 percent of the world’s agricultural production depends on dams for its water supply. China – the country with most large dams by far – is also approaching “alert” age with the average dam constructed 46 years ago. The U.S. is the leader in dam removal, proving that the risk and cost associated with old dams can be eliminated altogether in many cases. In the past 30 years, the country has decommissioned more than 1,200 dams. 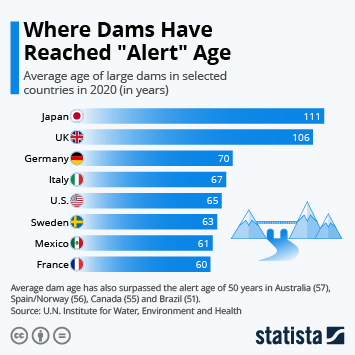 This chart shows the countries where the average age of large dams is highest (2020).