While PayPal's third-quarter revenue of $6.2 billion saw a minimal drop compared to Q2, the payment provider still managed to improve in almost every other aspect, from active accounts and net income to transactions completed. 56 percent of its Q3 earnings came from U.S. customers, showing the importance of its home turf for the online payment service. As our chart shows, United States citizens are still more likely to use other payment methods though.

According to data from our Statista Global Consumer Survey, only 17 percent of U.S. participants used services like PayPal to pay for their online purchases. Almost two thirds still use their debit or credit card for online payment. A similar spread can be seen in the UK, with 56 percent paying their online shopping with a card and 25 percent utilizing the services offered by PayPal and its competitors. On the other end of the spectrum are Germany with 51 percent and China with 76 percent of participants preferring PayPal and similar payment options. Even though the U.S. brand itself is not present on the Chinese market, it purchased 30 percent of GoPay at the beginning of 2021 to strengthen its foothold in the East Asian country, making the firm the sole owner of the payment provider.

The company probably won't be able to challenge the market's stalwarts anytime soon though: In 2019, China's dominantly mobile payment market was dominated by Ant Group's Alipay and Tencent's WeChat Pay with market shares of 54 percent and 40 percent, respectively, according to data from iResearch. This share might shift in the future, with the People's Republic's regulators cracking down on its tech giants from gaming to finance. Alipay, for example, was ordered to create a separate app for its microloan service in September.

In 2020, the market for digital payments including mobile POS payments, digital remittances and digital commerce had an estimated transaction volume of $5.4 trillion, a number that's expected to grow to $10.7 trillion in 2025. Roughly 63 percent or $3.4 trillion were generated by the digital commerce submarket which includes credit card and online payment provider transactions. 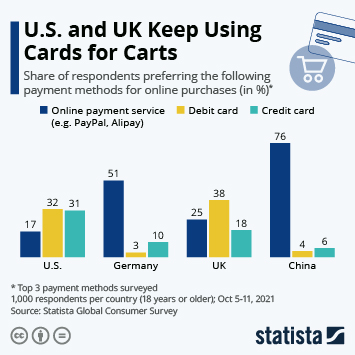 This chart shows the preferred payment methods for online purchases in selected countries.