Only 22 percent of the leadership positions of America’s top research universities are filled by women, according to a new report by the Eos Foundation. The situation for women of color is even more dismal, at only 5 percent. These numbers are even more striking when taking into account the academic success of women, who achieved more Bachelor’s degrees for the last 40 years, more Master’s degrees for the last 35, and more Doctoral’s for the last 15 in the U.S. than men.

Of the 130 public and private schools surveyed, 60 had never had a female president. When ranked, the University of California, Santa Cruz, the Graduate School and University Center of the City University of New York (CUNY), and the University of New Hampshire (UNH), came out on top, coming in at first, second, and third place respectively. According to Forbes, reasons for underrepresentation include a lack of diversity in hiring processes and systemic bias. Implicit bias against “feminine” academic work is also an obstacle to women’s progress, as found by Research by Stanford Graduate School of Education.

The authors of the report, Andrea Silbert, Magdalena Punty, and Elizabeth Brodbine Ghoniem, write: “Let’s be clear: The power gap is not a ‘pipeline’ issue. Our research found that women account for nearly 40 percent of all academic deans and provosts, from which 75 percent of all presidents are drawn. Their dramatic drop in the presidential ranks suggests that they still encounter systemic roadblocks one step from the top.” In order to see changes, the Eos Foundation is calling for university boards and presidents to make long-term public commitments to equity, and to produce annual reports to show their progress. 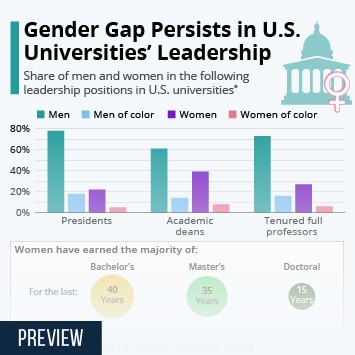 This chart shows how men continue to get the top jobs in U.S. universities.