At least half of the people living in OECD countries feel that they don't have the opportunity to contribute to policy-making decisions, according to new data from the 2021 OECD Trust Survey. As our chart shows, Colombians felt the least acknowledged out of the selected OECD countries, with nearly 70 percent of respondents saying they were “not confident they have a say” in matters of policy. The UK also came out above the OECD average of 50.13 percent, with 58.4 percent of Brits feeling disenchanted. South Korea is at the other end of the spectrum, with only a third of respondents feeling unheard by their government.

The report also looked at populations' trust in government, finding that young people, women, people with lower levels of education and lower incomes - especially those with financial insecurity - were more likely to distrust the authorities than other groups. In fact, where 51.2 percent of people with fewer financial worries trusted the government, this fell to just 34.6 percent of people in a "financially precarious" situation.

The writers explain that since feelings of political disempowerment “diminishes” trust, governments must “recommit to inclusive governance that incorporates diverse and disadvantaged perspectives in policy design, implementation and reform and increase representation of different views.” This includes creating opportunities for young people to engage in public participation, looking at the impacts of the pandemic specifically on young generations, as well as paying greater attention to regional differences within countries to better understand dissatisfaction with access to public services. 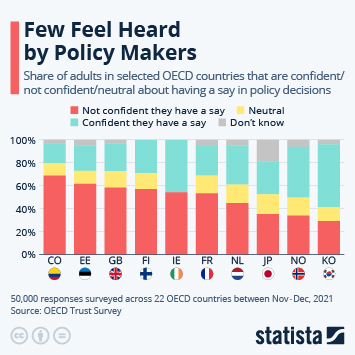 This chart shows the share of people that are confident/not confident that they have a say in policy-making decisions.