Published by Thomas Alsop, Jun 23, 2020
Sony, or Sony Corporation, is a multinational corporation with headquarters situated in the Minato District of Tokyo. Sony has generated over 75 billion U.S. dollars in total annual revenue in recent years with game and network services, financial services, semiconductors, and home entertainment and sound as their most lucrative segments. As a result, of the 114 thousand people around the world who Sony employ, the majority work within its electronics business segment.
As a global leader in consumer electronics, Sony is well known for manufacturing an array of products including televisions, digital cameras, smartphones, and headphones. However, the company is most commonly associated with the widely popular line of home video game consoles under the gaming brand PlayStation. Of the all-time sales of video game consoles, Sony registers three of its products in the top five, with Nintendo’s DS and Game Boy devices making up the rest. Other competitors include Microsoft’s Xbox, although Sony has sold nearly three times as many of its latest PlayStation 4 console when compared to the Xbox One.

In the following 5 chapters, you will quickly find the 39 most important statistics relating to "Sony".

Special Focus: Sony in the U.S.

The most important key figures provide you with a compact summary of the topic of "Sony" and take you straight to the corresponding statistics.

Television in the U.S. 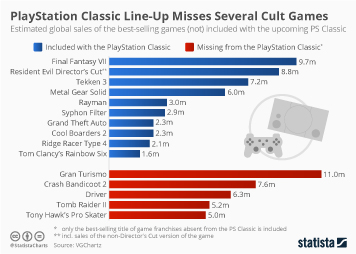