Internet usage of teenagers in the United States - Statistics & Facts

About 88 percent of teenagers aged between 13 and 17 years in the United States – have access to a desktop or laptop computer. This share slightly varies according to ethnicity and household income. While 90 percent of white, non-Hispanic teenagers have access to a computer in 2018, about 89 percent of black, non-Hispanic teenagers had access to a computer that year. Approximately, about 97 and 93 percent of girls and boys respectively have access to a smartphone. Overall, teens are very well connected and perform most online activities via mobile.
Teenagers are particularly engaged online audiences, especially on social media. As of spring 2019, Snapchat was the favorite social network among teens in the United States, edging out Instagram and placing far ahead of Twitter and Facebook. A January 2019 survey of Generation Z internet users in the United States revealed that 65 percent of teens accessed Instagram on a daily basis. YouTube was ranked second with a 63 percent daily usage rate. Teens are also very aware of their constant connectivity – April 2018 survey data revealed that 27 percent of teens reported to checking their social media hourly, and a further 16 percent stated that they accessed social media even more often.

Unfortunately, cyber bullying is also a big topic among U.S. teens. According to an April 2019 survey, 17.4 percent of U.S. middle and high school students had been bullied online in the past 30 days. The most common form of online bullying were mean and hurtful comments as well as online rumors. As of the latest survey period, more than a third of middle and high school students in the United States have ever been victim to cyber bullying. As of November 2018, 48 states had electronic harassment laws which explicitly included cyber bullying. A total of 45 states included school sanctions in their cyber bullying laws.
This text provides general information. Statista assumes no liability for the information given being complete or correct. Due to varying update cycles, statistics can display more up-to-date data than referenced in the text.
Published by Ani Petrosyan, Jul 6, 2022 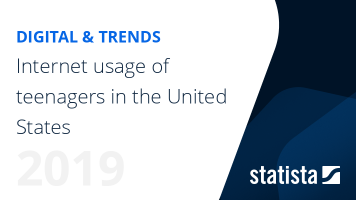 The most important key figures provide you with a compact summary of the topic of "Internet usage of teenagers in the United States" and take you straight to the corresponding statistics.