This dossier provides statistical information about ethnic foods in the United States. Ethnic cuisine includes different styles of food with a certain heritage or culture such as Mexican food, Asian food, or Soul food. A different, common term used is international food.
As international travel, immigration, and globalized trade increased worldwide, the interest and attention of ethnic cuisine has risen. U.S. retail sales of ethnic foods amounted to about 11 billion U.S. dollars in 2013 and the diverse category is estimated to generate over 12.5 billion U.S. dollars by 2018. Most of the category dollars are created by Mexican/Hispanic foods, followed by products with Asian heritage. Italian food is also a quite popular ethnic cuisine among Americans. Almost two thirds of female U.S. consumers stated to eat Italian cuisine at least once a month.

A recent consumer survey revealed that a good selection of ethnic and cultural foods is very important for 24.8 percent of survey respondents when selecting their primary grocery store. Another survey among U.S. specialty food consumers found out that 44 percent of respondents purchased Mexican foods at retail stores. The leading vendor of hard tortillas, soft tortillas, and taco kits was Mission Foods Inc. in 2021, with U.S. sales reaching over 1.24 billion U.S. dollars.

In the out-of-home market, new trends such as Peruvian or Korean cuisine were becoming apparent. Ethnic-inspired breakfast items such as Asian-flavored syrups or coconut milk pancakes were also named as an innovation on U.S. breakfast/brunch menus.

This text provides general information. Statista assumes no liability for the information given being complete or correct. Due to varying update cycles, statistics can display more up-to-date data than referenced in the text.
Published by Statista Research Department, Nov 22, 2022

Share of Americans who purchase Mexican food at retail stores
44%

Average household food expenditure in the U.S. 2021, by ethnicity

Consumption of Mexican food and ingredients in the U.S. 2020

Consumption of dry packaged pasta (spaghetti, macaroni and noodles) in the U.S. 2020 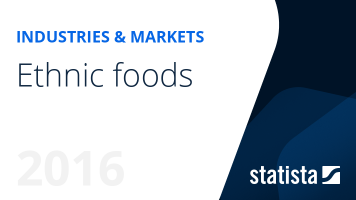 The most important key figures provide you with a compact summary of the topic of "Ethnic foods in the U.S." and take you straight to the corresponding statistics.