Meta is a multinational technology company located in California, founded in 2004 by CEO Mark Zuckerberg. Meta, formerly known as Facebook Inc., renamed and rebranded in October 2021, with the aim of starting a new chapter for the company and becoming more closely linked to the metaverse, to avoid being overly associated with Facebook as a platform. Whilst integration with the metaverse is still a work in progress, Meta plans to create a different kind of online experience for users via augmented and virtual reality. The company’s products and services include Facebook, Messenger, Instagram and WhatsApp, which are referred to as Meta’s Family of Apps (FoA). Reality Labs is Meta’s VR and AR division, which focuses on all aspects of the company’s research and development in this area.

One year in, Meta's much discussed rebranding and focus on the metaverse has not so far worked out in the company’s favor and as of the beginning of November 2022, Meta disclosed that Facebook, Instagram, and WhatsApp, were going to see a significant wave of layoffs, affecting around 11,000 employees (13 percent of the firm’s workforce). During this period of downturn, Meta's market capitalization had fallen to 250 billion U.S. dollars, a far cry from its peak of 1.07 trillion U.S. dollars in August 2021. At that point, Meta was one of the very few businesses to ever exceed a trillion-dollar market capitalization. Zuckerberg cited macroeconomic downturn, increased competition, lower ad revenues, and post-COVID normalization of revenue trends.

Popularity and user numbers of Meta’s social media platforms continue to grow worldwide, with usage being indubitably boosted as a result of the COVID-19 pandemic. As of 2021, Facebook had roughly 2.9 billion monthly active users worldwide making it the most used social network in the world. Although Google’s video sharing service YouTube ranked second, WhatsApp, Instagram and Facebook Messenger all belonged to the top five most popular social networks worldwide. Additionally, Meta’s photo sharing app Instagram reached two billion monthly active users worldwide in 2021, just over 11 years after being launched.

Another product owned by Meta is virtual reality headset Oculus. The mobile app compatible with the VR headsets experienced a huge increase in downloads last year, with a substantial surge over Christmas 2021.

In 2018, the Cambridge Analytica scandal, in which people’s data was used without their consent, brought Meta’s business ethics into public discussion. More recently, Meta has been accused of inadequate action surrounding content regulation, as the company’s social media platforms have been utilized for the spread of conspiracy theories and misinformation, a pressing matter when considering a large proportion of adults use social media as a source of news. With Meta’s planned integration of its products and services with the metaverse, questions have been raised regarding the already problematic relationship with content control and how this could be tackled in a virtual reality environment.
This text provides general information. Statista assumes no liability for the information given being complete or correct. Due to varying update cycles, statistics can display more up-to-date data than referenced in the text.
Published by S. Dixon, Nov 10, 2022 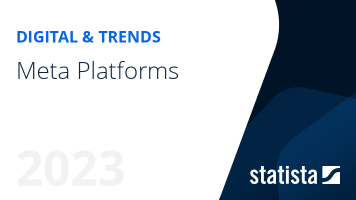 The most important key figures provide you with a compact summary of the topic of "Meta Platforms" and take you straight to the corresponding statistics.