Cream cheese is a type of soft and mild-tasting cheese. Made from milk and cream, it is intended to be consumed fresh, hence, it differs from other soft cheeses like Brie and Neufchâtel. As of 2021, U.S. total soft cream cheese sales amounted to about 238.1 million U.S. dollars. That year, U.S. retail sales of natural cheese amounted to over 12 billion U.S. dollars

Biggest players in the market

In the retail environment, consumers can find branded cream cheese such as Philadelphia and private label products. As of 2022, Philadelphia was by far the category leader in the United States. The brand is owned by the Kraft Foods Group, which is headquartered in Northfield, Illinois. Their product portfolio contains traditional cream cheese spreads and flavored cream cheese options. That year, overall branded cheese held a market share of 77.5 percent in the U.S. cream cheese segment.

U.S. per capita consumption of cream cheese and Neufchatel
2.86lb

Unit sales of the leading soft cream cheese brands in the U.S. in 2022 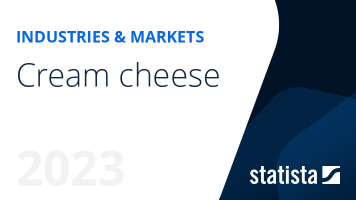 The most important key figures provide you with a compact summary of the topic of "Cream cheese market in the U.S." and take you straight to the corresponding statistics.