Published by Statista Research Department, Jan 7, 2022
Merger and acquisition deals play a big part in the corporate financing world. Ideally, M&A transactions result in creating a company that is both larger and more efficient than the two that have been operating on the market previously. M&A activity on the European market decreased in in terms of both volume and value in 2020. The value of mergers and acquisitions deals on the European market fell to approximately 690 billion euros in 2020, signifying a two year drop from 2018. Cross-border activity is very important for European M&A and the number of cross-border deals is set to increase over the next few years.

Who are the leading M&A advisors in Europe?

The process of merging two companies together or acquiring a different company is typically executed in a multi-step fashion. Therefore, such deals are usually managed by leading financial advisory companies. On the European market, Deloitte was the leading financial advisor for M&A transactions in terms of the number of deals. Legal advisors also play an important role in the M&A process. As of 2020, Latham & Watkins was ranked as the leading legal advisor firm for M&A transactions in the United Kingdom, consulting on deals with an aggregate value of approximately 68 billion British pounds.

M&A activity has also decreased in Central and Eastern Europe (CEE) in recent years. In the CEE region, the number of merger and acquisition deals fell to under 2,000 in 2020. When looking closely at sectors, the telecom and IT industries noted the highest levels of activity, followed by real estate and construction in 2020. The largest deal noted on that market in 2020 was the acquisition of a ten percent stake in Vostok Oil by Trafigura.

In the following 5 chapters, you will quickly find the 29 most important statistics relating to "Mergers and acquisitions in Europe".

The most important key figures provide you with a compact summary of the topic of "Mergers and acquisitions in Europe" and take you straight to the corresponding statistics. 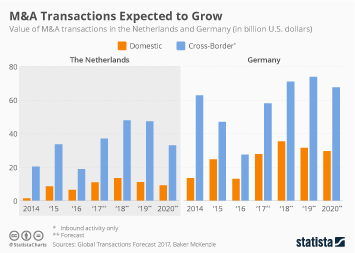