Published by Statista Research Department, Jun 7, 2022
"Should I stay or should I go?" London-based bankers and insurance companies are weighing their options to relocate some of their operations to Europe. One and a half year after the United Kingdom voted to leave the European Union, nobody knows for certain what the City of London's future links with the European Union will look like or what Brexit's effect on the UK economy will be. Negotiations between the EU and the UK are still ongoing, with one of the most contentious issues being the Irish border. This led outgoing Bundesbank executive board member Andreas Dombret to say in an interview to German newspaper Die Welt on February 19th, 2018, that banks "are welcome to hope for the best, but should prepare for the worst". This article aims to take a look at the following: 1) Brexit consequences for the London financial sector 2) potential locations for London finance to relocate to; 3) the reasons behind relocation;Text continues below.
1) What are the potential consequences of Brexit for the London City? The EU did decide on November 20, 2017, to move the European Banking Authority (EBA) from London to Paris. Other than this, potential consequences are difficult to assess as numbers are not final. Consultancy firm Oliver Wyman estimated in August 2017 that a hard Brexit could drive 31,000 to 35,000 jobs out of the UK across all financial services. The London City does house several financial institutions. As of December 2016, four of the six leading banks ranked by total assets in the United Kingdom were located in London. HSBC Holding's total assets value, for example, amounted to approximately 2.4 trillion U.S. dollars.

2) Frankfurt and Dublin seem to be emerging as the main destinations for the relocation out of London, along with Paris, Luxembourg, Brussels and other potential suitors. Each of these cities has its particular advantages and disadvantages:

Frankfurt is seen as attractive in terms of supervisory stability and influence, with the presence of the European Central Bank and Deutsche Bank. The city has already attracted UBS, JPMorgan and Goldman Sachs. Predictably, the take-up of office real estate in Frankfurt is growing fast.
Dublin has the potential to surpass Frankfurt in the end, due to its tax advantages and earlier success in bringing in the European headquarters of big tech companies such as Microsoft, Facebook and Google. However, its location is deemed less convenient than the London City. Barclays has already announced plans to expand into the Irish capital.
Paris, on the other hand, has an attractive location and is already home to several major wholesale banks and the EBA. Yet, only HSBC and French bankers BNP Paribas, Crédit Agricole and Société Générale have so far announced to go in the direction of the Seine. France has difficulties with strict labor laws, as can be seen by the amount of average usual weekly hours worked in 2015. Between 2000 and 2015, the weekly average was around 36 hours.
Luxembourg's main selling point is its stability, together with its focus on investment funds, insurance and asset management. AIG, RSA, CNA Hardy and FM Global are examples of companies that decided to move parts of their activities to the Grand Duchy. Indeed, approximately 57 percent of Luxembourg CEOs from the financial sector expected Brexit would impact their industry in a positive way in the next five years.
Brussels has the presence of the European Union's main governing bodies and supervisors. Lloyds and QBE Insurance Group already made their interest known to relocate to Belgium's capital. Additionally, the Belgian government announced in July 2017 that corporate tax would be lowered from 40 percent (the highest in Europe bar Malta and France) to 29 percent by 2020. In September 2016, business executives listed tax rates as the most problematic factor for doing business in Belgium.

Other potential cities for relocation include:

Amsterdam on average has a well-educated population and good financial supervision. In 2016, Dutch financial regulation achieved almost the same score as Luxembourg when it came to the regulation of securities exchanges. Financial trading companies, such as Tradeweb and Radix Trading, already applied for licenses, together with Royal Bank of Scotland and Mitsubishi UFJ Financial Group. Despite that, the city struggles with the high cap Dutch law put on bonus schemes for bankers of 20 percent of their annual salary (compared to 100 percent for the rest of Europe).
Madrid has an established banking sector with Banco Santander and BBVA. The country is also showing signs of recovery from the financial crisis, with the share of non-performing loans in the country's portfolio reaching a value of approximately six percent in 2016.
Stockholm produces many technology startups and is home to iZettle and Klarna, two payment businesses. The Swedish attitude towards an economic and monetary union with the euro, however, was negative in 2016.

3) Why would financial companies move away from the London City? With expansion to, for example, Frankfurt, Dublin or Luxembourg, London-based financial services companies maintain their access to the single market, as most financial companies assume that the UK is going to lose its financial passport rights after Brexit, with no special financial services deal and no transition period. These passporting rules allow businesses to sell services across the European Union or European Economic Area (EEA, the EU together with Iceland, Liechtenstein and Norway) from anywhere within it, as long as they are based in (and regulated by) one country. Not signing a new trade agreement, which includes a solution for this passport-construction, was perceived as a bad outcome for Britain. In addition, new EU laws that come in effect from January 2018 require investment companies and trading platforms who are active on the European Union to have an office on the European mainland. Banks need at least 12 months to establish full-scale operations inside the EU, essentially meaning that in March 2018 at the latest, not March 2019 - the date of the actual Brexit -, they would have to start moving people if no adequate deal has been reached yet.

The future landscape of European banking and insurance remains uncertain and is not shaped by location decisions alone. The EU, for instance, has to take an approach to financial market infrastructure and to help insure smooth functioning of banking and financial markets when the deadline of the Brexit negotiations arrives in March 2019. Now that London financial services come calling to an increasingly fragmented market in Europe, more cooperation seems required to ensure everything will go well on 'Day 1' of the post-Brexit world.

Leading bank for large corporations in Germany in 2020
Commerzbank, market penetration rate of 87%
Market share of life insurance business in terms of gross premium in Germany
32.7%

The most important key figures provide you with a compact summary of the topic of "Brexit relocation of London banks and finance to Europe" and take you straight to the corresponding statistics.

The office market in Europe 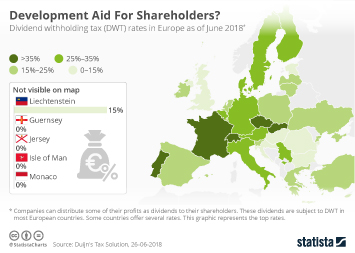 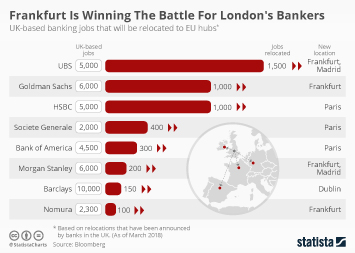 Frankfurt Is Winning The Battle For London's Bankers