Published by Statista Research Department, May 25, 2022
The dessert market in Europe is rich in product offerings, from cakes and brownies to frozen novelties and ice cream, Europeans definitely have a sweet tooth. In 2021, retail sales of dessert mixes in Europe exceeded 1.2 billion U.S. dollars, while sales of frozen processed dairy and desserts exceeded 16 billion U.S. dollars across the continent. Major players in the European ice cream industry include Unilever, Nestlé, and Froneri Schöller among others.

Germany topped the list of leading ice cream producers in Europe, with a production volume of more than 634 million liters of ice cream. Italy followed closely in second place, producing around 553 million liters of ice cream. The number of companies producing ice cream in Germany has remained somewhat stable in the last decade, fluctuating at around 15 ice cream manufacturers. Among the leading players in the ice cream market in Germany is Froneri Schöller, which boasts renowned ice cream brands such as Häagen-Dazs in its brand portfolio. Froneri Schöller generated around 286 million euros in revenues in Germany in 2020.

Which brands of ice cream are European consumers’ favorites?

Many different brands and types of ice cream exist on the European market, and consumers’ favorites vary considerably between countries. For instance, if we consider ice cream tubs and blocks, Ben & Jerry’s ice cream is the uncontested favorite of consumers in the United Kingdom. In comparison, Ben & Jerry’s is far from ranking first according to French consumers who prefer brands such as Magnum, Häagen-Dazs, and Nestlé. Looking at the hyper- and supermarket distribution channel in France, Unilever captured a share of around 31.5 percent of the French ice cream market in 2020. Unilever owns brands such as Magnum and Carte d’Or among others.

In the following 4 chapters, you will quickly find the 21 most important statistics relating to "Frozen dessert market in Europe". 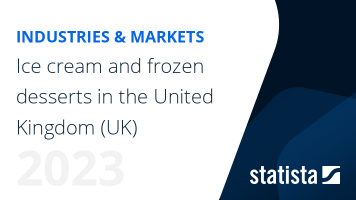 The most important key figures provide you with a compact summary of the topic of "Frozen dessert market in Europe" and take you straight to the corresponding statistics.

Frozen Foods Market in the U.S.

Ice cream in the UK

Bread and bakery products in Europe