Published by
Evgenia Koptyug,
Jun 16, 2022
The confectionery industry in Germany produces a large variety of products which find their way into the pockets and homes of eager consumers. In general confectionery is defined as chocolate or sweets. It seems to be sold virtually everywhere, from small kiosks to supermarkets, to high-end department stores and, of course, online by various providers. German confectionery is also exported to other countries, with chocolate and other food preparations containing cocoa accounting for the highest export volume in 2021. Most recently, over 6.5 million German consumers stated they were very interested in confectionery.
However, as with many other types of food products, confectionery too is receiving more attention as consumers question their eating habits, discuss healthy lifestyle options, sustainable and fair trade production, and also become increasingly concerned with the effects of long-term sugar consumption, as sugar is, of course, a key ingredient in most sweets. Per capita sugar consumption fluctuated in recent years, though it has increased since the 1950s.

Total confectionery sales volume in Germany amounted to over 1.7 thousand tons in 2019. Of these, the majority were sold in discounters, followed by an almost even split between big and small consumer markets. Meanwhile, fair trade confectionery sales amounted to 1,900 tons in 2021, a figure that has grown significantly in the last decade. In terms of per capita consumption, chocolate products were the most consumed, followed by biscuits and ice cream. Chocolate bars were mostly consumed several times a month, while packaged ice cream was largely eaten less than once a month.

In the following 4 chapters, you will quickly find the 37 most important statistics relating to "Confectionery in Germany". 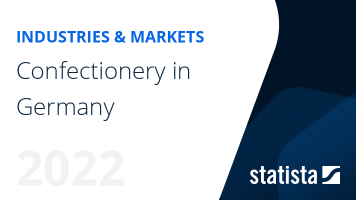 The most important key figures provide you with a compact summary of the topic of "Confectionery in Germany" and take you straight to the corresponding statistics.