Facebook in Belgium, Luxembourg and the Netherlands - Statistics & Facts

Facebook is one of the world's largest social media platforms and among the most popular in the Benelux region. As of 2018, the number of monthly active Facebook users in the Netherlands remained unchanged, whereas in Belgium and Luxembourg the numbers increased. Belgium saw an increase of half a million users in 2018, from roughly seven million monthly active users in 2017. Luxembourg had 360,000 users in January 2018. The user penetration rate is projected to reach percentages of approximately 51.5 percent and 60.5 percent of the total population come 2021 in Belgium and the Netherlands respectively.
According to a 2017 survey, roughly 79 percent of respondents in Belgium aged 18 to 24 used Facebook on a daily basis. Belgium had an equal share of male and female Facebook users, however the number of male Facebook users was higher among people under the age of 44. The most popular brand in Belgium on the social network was Dutch webshop bol.com with over 820,000 likes in May 2018. Italian cosmetics brand KIKO Milano was the second largest with approximately 652,000 likes.

In Luxembourg, the mobile use of Facebook is relatively high. 89 percent of all Facebook users in the Grand Duchy accessed the social media platform through mobile devices. However, the average engagement rate for Facebook link posts (the number of people who interacted with a post compared to the total number of people to whom that post was directed) was slightly above two percent in 2018.

The Silicon Valley company received criticism in the Netherlands due to privacy concerns and reports on fake news. In a survey performed in February 2018, roughly 44 percent of respondents indicated they agreed with a statement that said they spent less time on Facebook than they used to. Especially Millennials voiced this opinion. Additionally, the use of the social platform as a news source decreased in the Netherlands between 2017 and 2018.

Facebook also owns two other popular online services in the Benelux: WhatsApp and Instagram. Since 2014, WhatsApp is a Facebook subsidiary and is considered the most popular social media platform in the Netherlands with approximately 11.5 million users in 2018. In Belgium, 97 percent of the 15- to 19-year-olds indicated they used the messaging service. Instagram, owned by Facebook since 2010, is a photo and video sharing application with roughly three million monthly active users in Belgium in 2018. At the same time, there were 150,000 in Luxembourg. The number of monthly active Instagram users in Luxembourg as a percentage of total population, however, was 27 percent in 2018, which was one percent higher than in Belgium. The Netherlands had 5.5 million users who were active at lease once per month on Instagram.
This text provides general information. Statista assumes no liability for the information given being complete or correct. Due to varying update cycles, statistics can display more up-to-date data than referenced in the text.
Published by S. Dixon, Feb 8, 2022 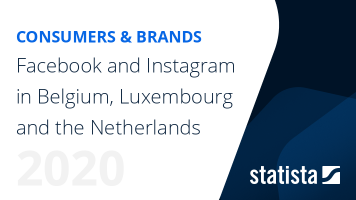 The most important key figures provide you with a compact summary of the topic of "Facebook in the Benelux" and take you straight to the corresponding statistics.