To say that social media is a global phenomenon is almost an understatement, as the number of worldwide social network users is expected to grow from 3.6 billion in 2020 to around 4.4 billion in 2025, around a third of the entire global population. As internet access and smartphone use expand worldwide, social media use shows no signs of slowing. In 2020, the average daily social media usage of internet users worldwide reached 145 minutes per day, with China accounting for the largest number of social media users. As of October 2020, there was an estimated 4.08 billion active mobile social media users worldwide.
This increased usage of social networks is due to the popularization of mobile technologies in the past decade and the increasing availability and affordability of mobile internet. Social messaging apps have proven themselves as a more advanced alternative to operator-based text messaging via SMS. One of the most popular mobile messaging apps worldwide is WhatsApp, which as of January 2021 was accessed by two billion users on a monthly basis. Second-ranked Facebook Messenger was estimated to have 1.3 billion monthly active users the year before.

As mobile devices offer flexibility in terms of on-the-go service access, it is hardly surprising that online usage is shifting towards mobile. Some networks, such as Facebook, started out as web-based and then extended towards access through mobile browsers and smartphone apps, while other networks, such as Instagram, were initially mobile-only and later transitioned into cross-platform availability as well. An increasing number of social networks are therefore accessible through multiple platforms in order to offer users access to different features according to their needs, time and preferred device. There are however stark regional differences in use of mobile social networks. As of January 2019, some 61 percent of users in North America accessed social media via mobile while the global mobile social penetration rate was 42 percent.

On a worldwide scale, Facebook is the undeniable leader of social networks, with approximately 2.74 billion active users around the world. Other popular social networks are Instagram, Snapchat, Pinterest, Tumblr, Vine and Twitter, while popular mobile chat apps include Whatsapp, WeChat, and Facebook Messenger. A global sensation 2020 has definitely been the short-form video social network TikTok, with Norway having the largest user growth of 249 percent in 2020.
This text provides general information. Statista assumes no liability for the information given being complete or correct. Due to varying update cycles, statistics can display more up-to-date data than referenced in the text.
Published by S. Dixon, Feb 8, 2022

TikTok usage distribution in the U.S. 2022, by age 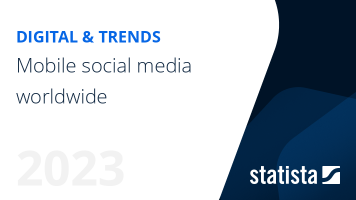 The most important key figures provide you with a compact summary of the topic of "Mobile social media worldwide" and take you straight to the corresponding statistics.