Consumers and businesses use social media all around the world as a means of communication and sharing information. The highest rates of social media adoption are seen in Northern and Western Europe, followed by Northern America and Southern America. Time spent on social media has continued to increase in the biggest European markets, including Germany, the UK, France, Spain, and Italy, as people have grown more reliant on online networks.

What do Europeans do on social media?

There are numerous purposes for using social media, and these purposes vary by demographics such as nationality and age group. In 2022, sending private messages on social media was the most common activity for people in Germany and France. More than half of all social media users in the UK, Spain, and Italy stated that "liking" other users' posts was their most frequent social media activity. Other regular activities performed on social media included commenting on posts, following people, and posting pictures and videos.

Reading news items was the main reason for using social media for the majority of users in Italy, whilst being able to keep in touch with friends and family was a key motivation in the UK, Germany, France, and Spain. Social media consumption increased during the COVID-19 pandemic and subsequent lockdowns. In the UK, 35 percent of users claimed that during the pandemic, they started accessing social media more than before.

The utilization of social media as a resource for discovering new information and content is also increasing. In 2022, almost a third of all Millennials and Gen Z users in Europe said that they used online social networks to find new recipes, whilst 56 percent stated they cooked meals that were trending on social media.

Comparable to global trends, certain social media sites perform better than others in Western Europe. The most popular platform on the continent is Facebook, which has over 456 million users as of 2022, followed by Instagram, which has an audience of around 281 million. The majority of social media platforms, including TikTok, Reddit, and Snapchat, are expected to see a growth in user numbers in the years ahead, albeit at a slower rate than they have experienced in the past.

Even though Facebook is the leading platform in terms of audience size, between the final quarter of 2021 and the second quarter of 2022, the platform saw its biggest decline in users in a decade. Nevertheless, 95 percent of social media users in the UK said they were aware of Facebook, and 69 percent of users said they were loyal to the platform. In Germany, the same result was achieved in terms of awareness, but platform loyalty was lower as was Facebook's overall popularity.

There are currently around 281 million Instagram users in Europe, making it the second most popular platform after Facebook. By 2027, it is likely there will be 321 million users of Instagram in Europe, a small but steady increase similar to that of Facebook. Using the UK and Germany as examples of how Instagram is received in Europe, awareness of the platform is high, but buzz surrounding the platform is considerably lower than Facebook’s.

Social media trends change frequently, and businesses must adapt their online ads to keep up. In 2020, 7.3 billion euros were invested in social media video ads in Europe, an increase from six billion euros the previous year. For traditional social media advertisements, such as still images, expenditure was 8.8 billion euros in 2020, up from 7.9 billion in 2019.

Out of all the European markets, the United Kingdom was projected to have the largest social media advertising revenue in 2022. The UK produced higher numbers than Germany, France, Italy, and Spain combined, with a total expenditure of about 12 billion dollars.

Usage of social media ads varies by industry. Overall, the vast majority of accommodation enterprises in the European Union used social media, as did 81 percent of information and communication businesses. Furthermore, 61 percent of retail merchants in the EU used social media.
This text provides general information. Statista assumes no liability for the information given being complete or correct. Due to varying update cycles, statistics can display more up-to-date data than referenced in the text.
Published by S. Dixon, Nov 24, 2022

Share of online time in Europe spent on social media
26% 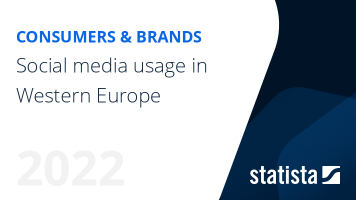 The most important key figures provide you with a compact summary of the topic of "Social media usage in Western Europe" and take you straight to the corresponding statistics.