Published by Statista Research Department, Sep 13, 2021
Brazil is the most populous country in Latin America with over 200 million people. The demographic structure of the largest South American country depicts a relatively young population with slightly more women than men. Brazil has been experiencing significant unemployment and homicide rates with 13.1 percent of the young working age population out of work and over 62 thousand homicides recorded only in 2016.
A dissatisfied young population with not enough opportunities, high inflation, economic instability and a far-right politician who has been fueling polarization with hate speech and fake news, has led the country to the verge of returning to an undemocratic regime, after only 29 years of democratic rule. The economic crisis in the country can be traced back to mid-2014, during the government of Ms. Dilma Rousseff. Other factors such as the slow-down in exports to China, poor economic measures and a rising mistrust in politicians have also led to social unrest and paved the way for a populist far-right uprising.

The populist far-right candidate Jair Bolsonaro (PSL), a former army captain, has been a member of parliament for thirty years, during which he has had only two bills approved. He has praised the torturer colonel Brilhante Ustra, claimed that women should earn less, and shows no interest in protecting LGBT and black minorities in a country with high homicide rates of black people and homosexuals. His discourse spreads fear of a nonexistent communist threat, promises to fight corruption and defend conservative Christian and “family values”. He is strongly supported by evangelical religious organizations, which control a significant share of the media landscape and are well-off.

The candidate for the Workers Party (PT), Dr. Fernando Haddad, was the Minister for Education during former President Lula da Silva's government and during Ms. Rousseff's first term. He was also mayor of São Paulo until 2016. As Minister, he was responsible for the implementation of minority policies, facilitating their access to university education. Dr. Haddad defends welfare state policies, supports expanding investment in the free public health and education systems, and opposes a bill approved in 2016 that freezes all public investment.

The first round of elections took place on October 7, 2018 with over 46 percent of the valid votes cast for Bolsonaro and 29.3 percent for Haddad. The second and definitive round was held on October 28, 2018: Bolsonaro was elected the new Brazilian president with 55.1 percent of votes cast, while his opponent received the remaining 44.9 percent.

The most important key figures provide you with a compact summary of the topic of "Brazil Election 2018" and take you straight to the corresponding statistics. 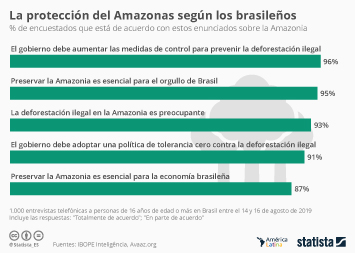