Published by Ian Tiseo, Nov 22, 2021
Since the manufacturing of plastics took off in the 1950s, the global production of plastic materials has surpassed more than nine billion metric tons. More than half of this plastic has ended up as waste. With so much waste produced each year, plastics have become an environmental issue worldwide. In the United Kingdom, an estimated 4.9 million metric tons of plastics are placed on the market each year, of which three-quarters become waste. As such, the UK is a major contributor to the plastic waste problem.

Plastic waste management in the UK

The war on plastics

Increased media attention has caused a backlash against plastics due to the environmental damage they cause. According to a 2021 survey, 92 percent of UK adults were concerned about plastic pollution. Although policies such as the single-use plastic carrier bag fee have helped lower waste, many believe more can be done to tackle the issue. In a bid to encourage recycling and tackle the plastic waste problem, the UK government has announced a plastic packaging tax that will take effect in April 2022. This will tax plastic packaging that doesn’t meet a minimum threshold of at least 30% recycled content 200 British pounds per metric ton. The introduction of a plastic bottle deposit return scheme was also announced in 2018, but this will not fully come into effect until 2024 at the earliest.

In the following 5 chapters, you will quickly find the 25 most important statistics relating to "Plastic waste in the UK".

The most important key figures provide you with a compact summary of the topic of "Plastic waste in the UK" and take you straight to the corresponding statistics. 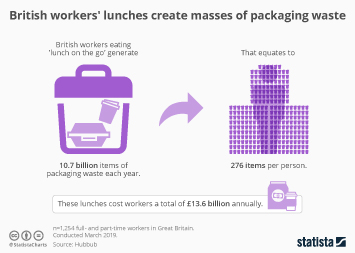