Plastic is an essential material used across all economic sectors due to its versatility. It has changed the way we live and is now an integral part of modern life, making many of the things we do today possible. To meet the ever-growing demand for these materials, global plastics production has soared in recent decades, and in 2019 hit an annual peak of 368 million metric tons. As a key plastic producing region, Europe accounted for 16 percent of production that year, with only China and North America producing more.

Since 2010, Europe's total plastics production has reached nearly 650 million metric tons. However, despite still being a vital player within the plastics industry, annual plastic production in Europe has been in decline in recent years. European plastics production peaked in 2017 at 64.4 million metric tons but has fallen annually since, and in 2020 dropped to 55 million metric tons, the lowest volume since 2009. In 2006, Europe’s share of global plastics production was almost 25 percent, but as regions like China have increased their market share, Europe’s has been in decline.
Germany is Europe’s largest plastic producer and manufacturer by far, accounting for a quarter of the region’s plastics converters demand. In 2018, Germany’s manufacturing of plastic products had a turnover of 76.6 billion euros. This was more than twice the turnover Italy had that year from manufacturing plastic products. Europe is also home to some of the world’s biggest plastic-producing companies, such as BASF and LyondellBasell.

Polypropylene (PP) was the most used polymer in Europe in 2019, accounting for 19.4 percent of plastics converter demand that year. Polypropylene is a commonly used thermoplastic that is used to produce products such as automotive parts, containers, and food packaging. The packaging segment is the largest end-use industry for plastics in Europe, with a market share of nearly 40 percent of plastic materials demand. The manufacture of plastic packing goods in the European Union had a turnover of 54.8 billion euros in 2018. The second-largest end-use market of plastic materials is building and construction, followed by the automotive sector
This text provides general information. Statista assumes no liability for the information given being complete or correct. Due to varying update cycles, statistics can display more up-to-date data than referenced in the text.
Published by Ian Tiseo, Nov 22, 2021 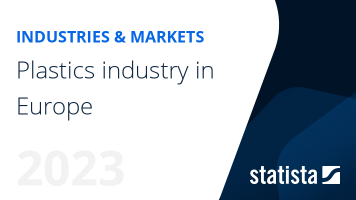 The most important key figures provide you with a compact summary of the topic of "Plastics industry in Europe" and take you straight to the corresponding statistics.